The greenery around us sparkled, the fresh raindrops on every plant shining from the rays of the emerging sun. I admired the Tansa Valley landscape through the window, about to arrive at our first destination to work with PRASAD Chikitsa’s Kitchen Garden Project team for the afternoon.

I learned that the essence of PRASAD Chikitsa’s Kitchen Garden Project is helping to ensure that the people in the villages of the Tansa Valley have the means to eat healthy, natural, and fresh food. PRASAD accomplishes this by providing families with typically 3-year-old seedlings (grown from indigenous seeds instead of the typical hybrid seeds) of a large variety of fruits and vegetables and helping them plant these on their own land. This initiative allows families to eat homegrown and organic vegetables instead of buying vegetables (mainly grown with unhealthy chemical fertilizers and not very fresh) from the nearby markets. It also proves to be much more cost efficient for the families. 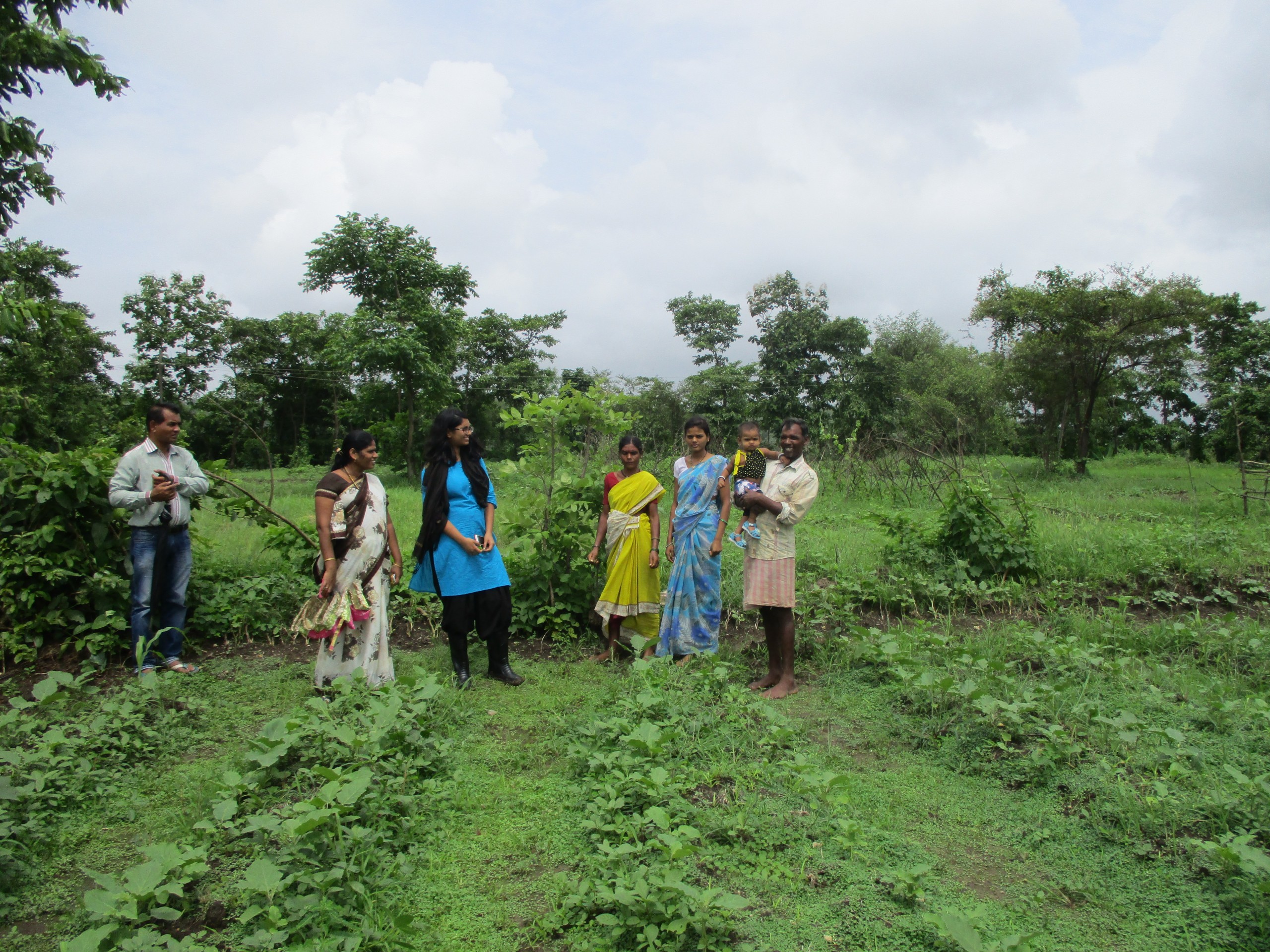 As we pulled up in front of the first small house and a plot of land, I took in the scene around me. I saw green fields far into the distance, with a thin fence surrounding the small field of the property we were in. Two middle aged women wearing thin cotton saris welcomed us and took us to the fields next to the house. 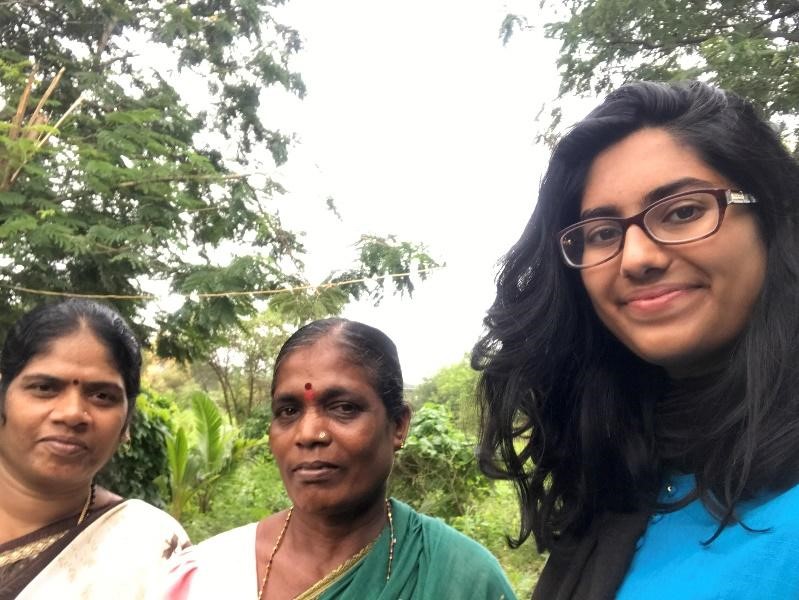 A photo with one of the women showing us around her family’s garden
and Kamini Namde, PRASAD Chikitsa staff

I was amazed to learn about all the different types of plants they were growing – some seasonal and some perennial. Okra, spinach, rice, cucumber, and bitter gourd were just some of the plants the family grew. They showed us around, telling us that they hadn’t been going to the market to buy vegetables at all – now that they had a garden and could grow their own, healthy food!

We visited a couple of other Kitchen Gardens in the area, every family welcoming us graciously and offering us chai and biscuits, and then showing us around their unique gardens, open to all my questions and answering each with a smile.

The final Kitchen Garden we visited was quite a ways from the family’s home.

As I walked slowly and carefully upon the muddy ground, my waterproof and sturdy tall boots often getting stuck in the keechad (soft mud), I saw the farmers walking far in front of us, wearing no shoes and expertly and quickly navigating, their feet never treading upon the sinking mud. After a couple of falls, I finally made it out to the expansive main field, on which mainly rice (paddy) grew in long lines, little green plants in the waterlogged soil. When we arrived at their vegetable garden, the farmer introduced me to his daughter-in-law, who was tending to a canola plant with one hand and holding her daughter in the other. Her daughter, Thrishta, probably about 2 or 3 years old, smiled at me when I said hello, her arms laden with the Kantola vegetable (also known as thristle gourd).

A big smile still on her face, she grabbed another one of the thistle gourds and held her arm out towards me. She dropped it in my hand, and then, in turn, dropped every gourd she was holding save one. Her mother shook her head at her, handed her to the farmer (her grandfather), and bent down to pick up the fallen vegetables in one swoop. 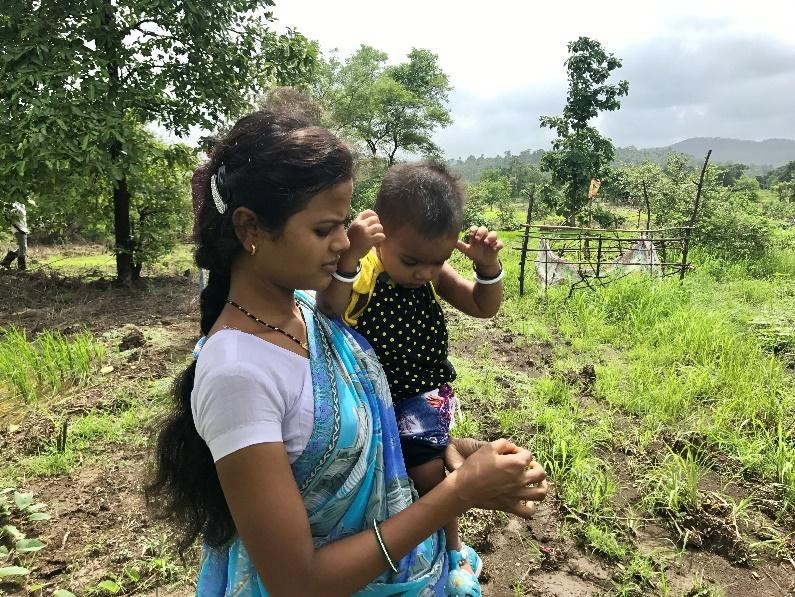 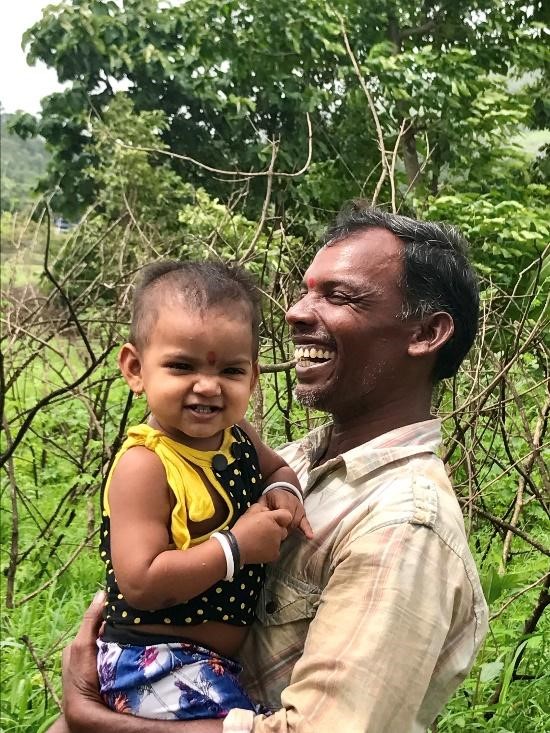 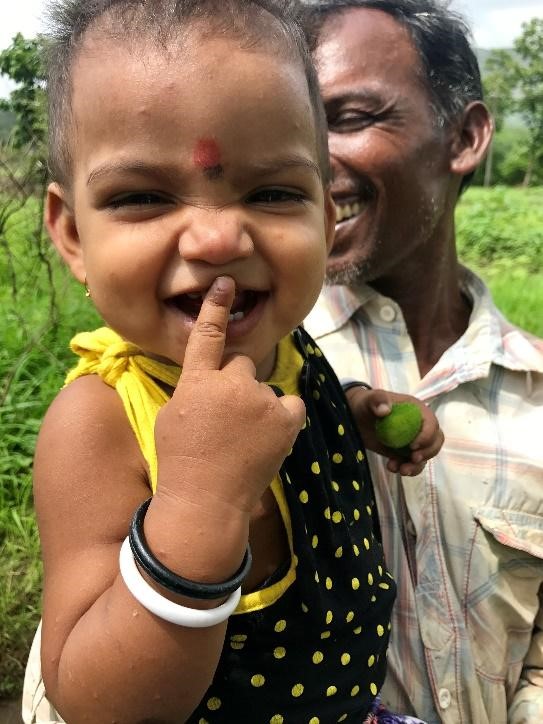 Thrishta laughing in her grandfather’s arms and then laughing at me
as I got my foot stuck in the keechad, or the sinking mud

They showed me what plants they were growing and gave us a tour of the garden, stopping at a mango tree at the end that PRASAD had just given to them.

After the beautiful and inspiring visit to some of the Kitchen Gardens, we stopped at the PRASAD Chikitsa greenhouse. Atul Patil, in charge of the Kitchen Garden initiative in PRASAD showed me around the vast fields, and the over 10,000 seedlings of a huge variety of plants that would eventually be distributed to different families, enabling them to start their own Kitchen Garden. I was impressed by the new experiments that the farmers working for PRASAD Chikitsa were trying to further improve the program – the newest one was trying to sprout the rice plant seeds without using any soil!

Getting a tour of PRASAD’s own gardens was a great end to an enjoyable day! 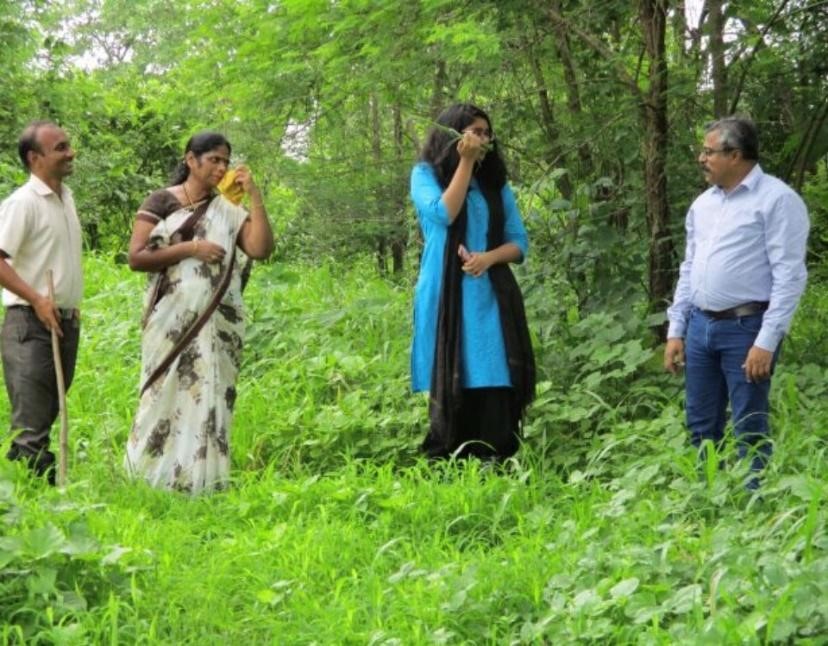 Smelling a piece of the lemongrass plant in PRASAD’s field

Though they may not seem like much at first glance, every garden we visited was incredibly unique and inspiring. As each family showed me their gardens, every member’s eyes would shine with pride at all the work they’d done and how far they’d come. Their big smiles both conveyed their gratitude and contentment, as well as planted a seed of inspiration in everyone around them, especially me. Thank you PRASAD!