We had the incredible opportunity to learn about PRASAD’s agricultural initiatives firsthand, by spending two of our mornings with some of the programs. Learning earlier in the week about the fruit orchard program and replanting jamun saplings in the PRASAD fields made us curious about the next stage of this project – distributing the saplings. 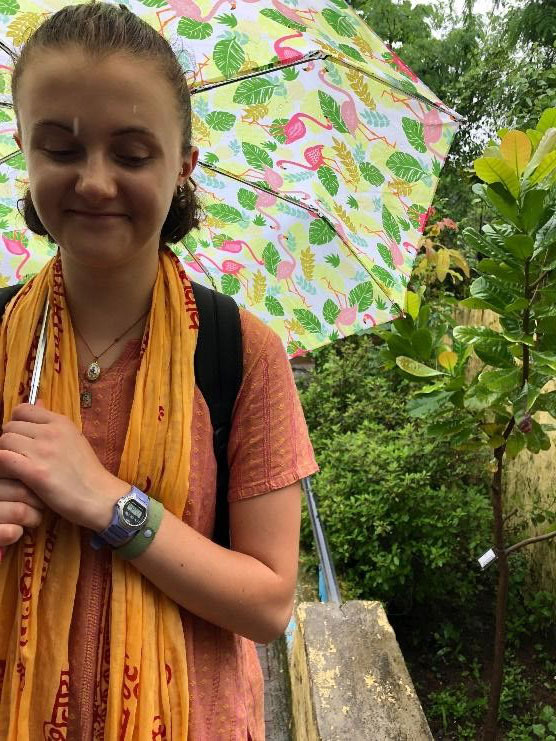 Bhanu posing next to a jamun plant

Our curiosity was satisfied as we spent another morning replanting older jamun saplings at a school. Although most of the saplings are sold to the local farmers, some are given to nearby schools in an effort to restore and preserve the environment and provide delicious fruit for the students.

The PRASAD van took us to the Kelthan School to help the students plant jamun saplings around the perimeter of their property. We were welcomed by two 9th grade girls, one with an arati tray filled with flowers, and the other with many small cups of chai. Smiling, they and one of the teachers handed each of us an orange flower and a steaming cup of chai. It was a warm welcome into the small field behind the school. A throng of students came into view, each holding a small sapling. The Marathi dialect and the sound of laughter could be heard ringing through the courtyard and hallways of the school. 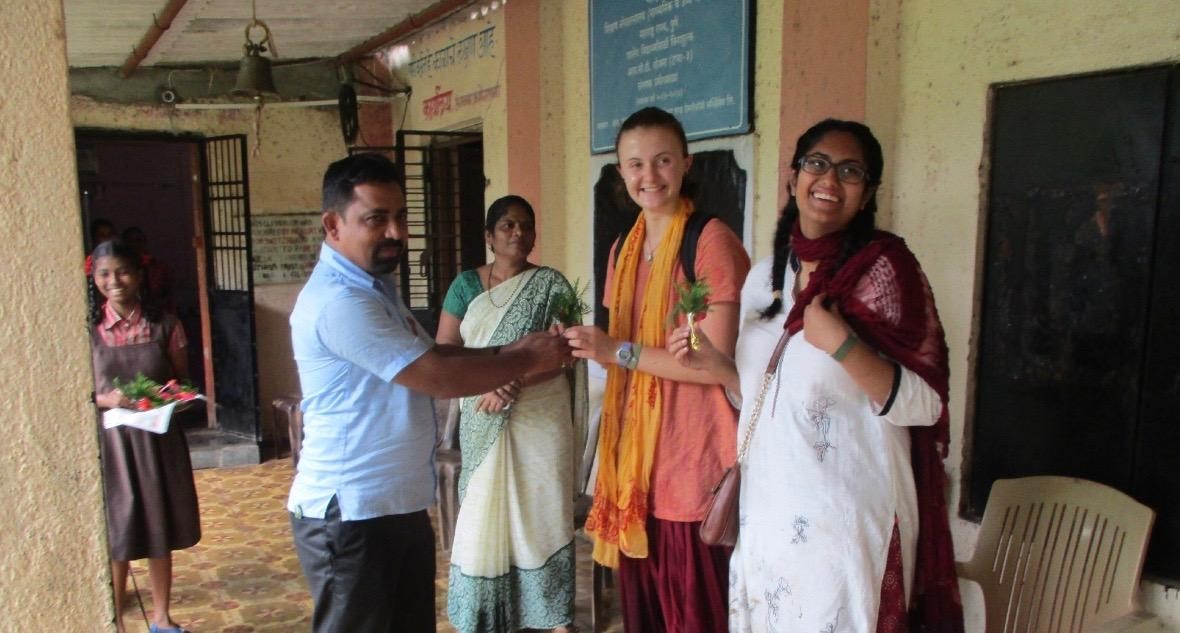 Holding the beautiful flowers the school gave to us

We joined one group of students and followed them to a clearing of fresh soil. Rolling up our kurta sleeves and being careful to avoid the kichad (soft mud), we began to dig holes big enough to plant the saplings. 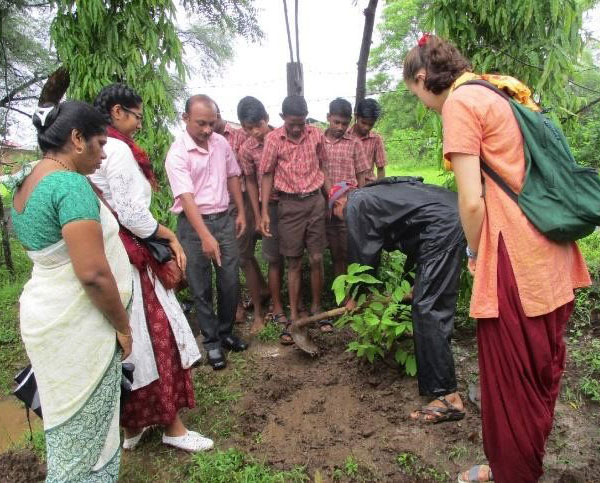 Learning how to plant the saplings 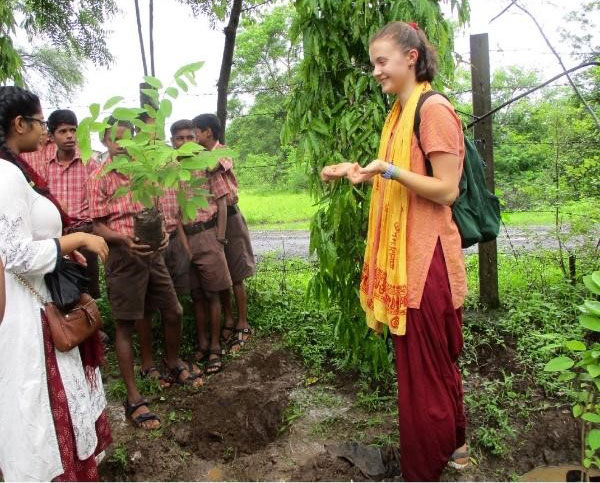 One student holding up the sapling

Most of the other groups of students had already finished their task and some gathered around us to join in the giggles that ensued as the two of us tried to squat in the mud without getting our clothes too dirty (a futile effort). 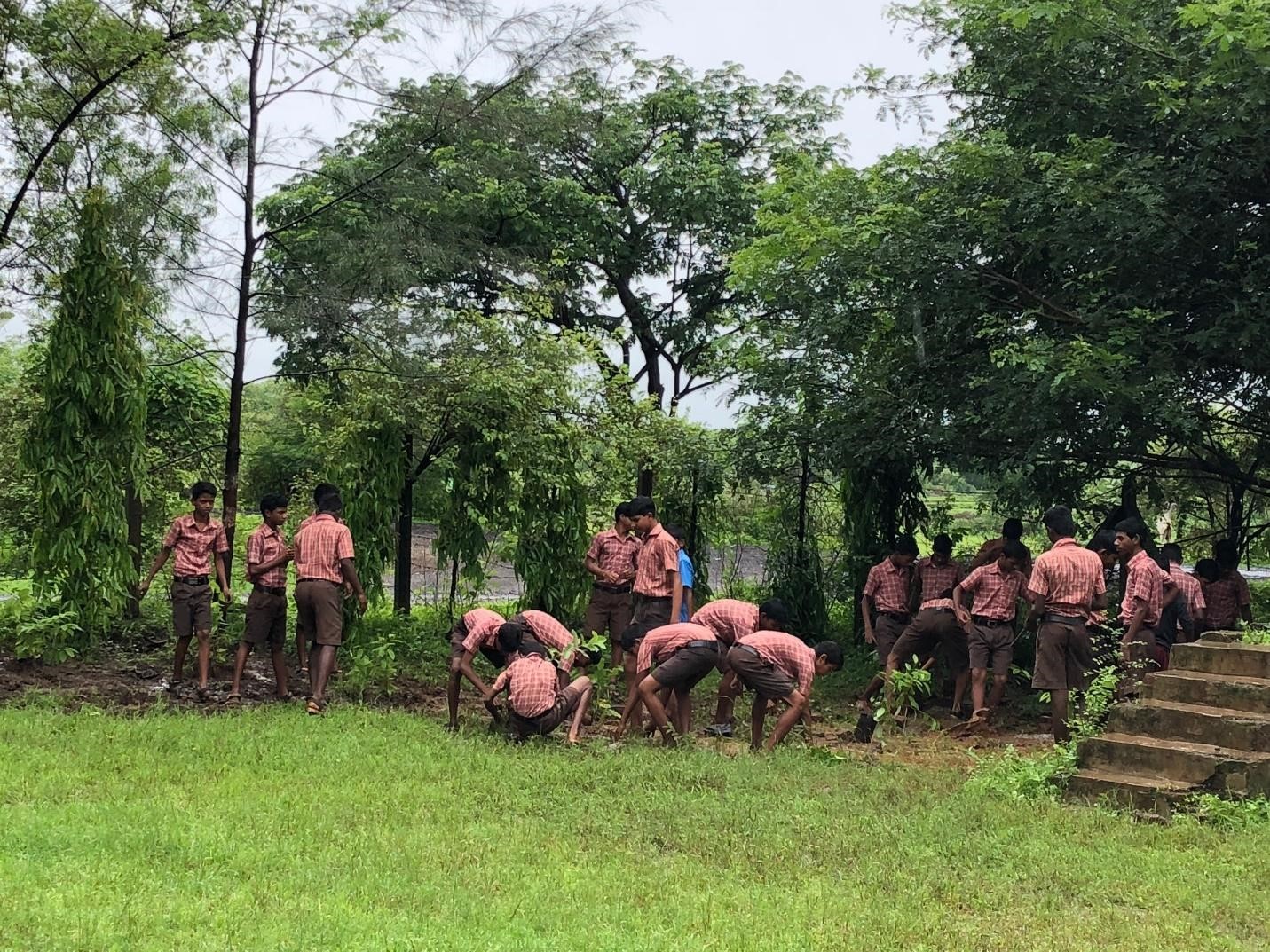 As we waited for the morning to come to a close, we discussed the agricultural program with Atul Patil, PRASAD Chikitsa’s agriculture program manager. Although the fruit trees are helping the farmers generate income during the dry summer months, PRASAD also plants flowers. Flower plants can grow very close to one another, allowing farmers to fill unused space between other crops, as well as providing them with another source of income. Flowers, especially mogra (jasmine) and genda (marigold), are often offered at temples in the area, making them very popular plants among the farmers. 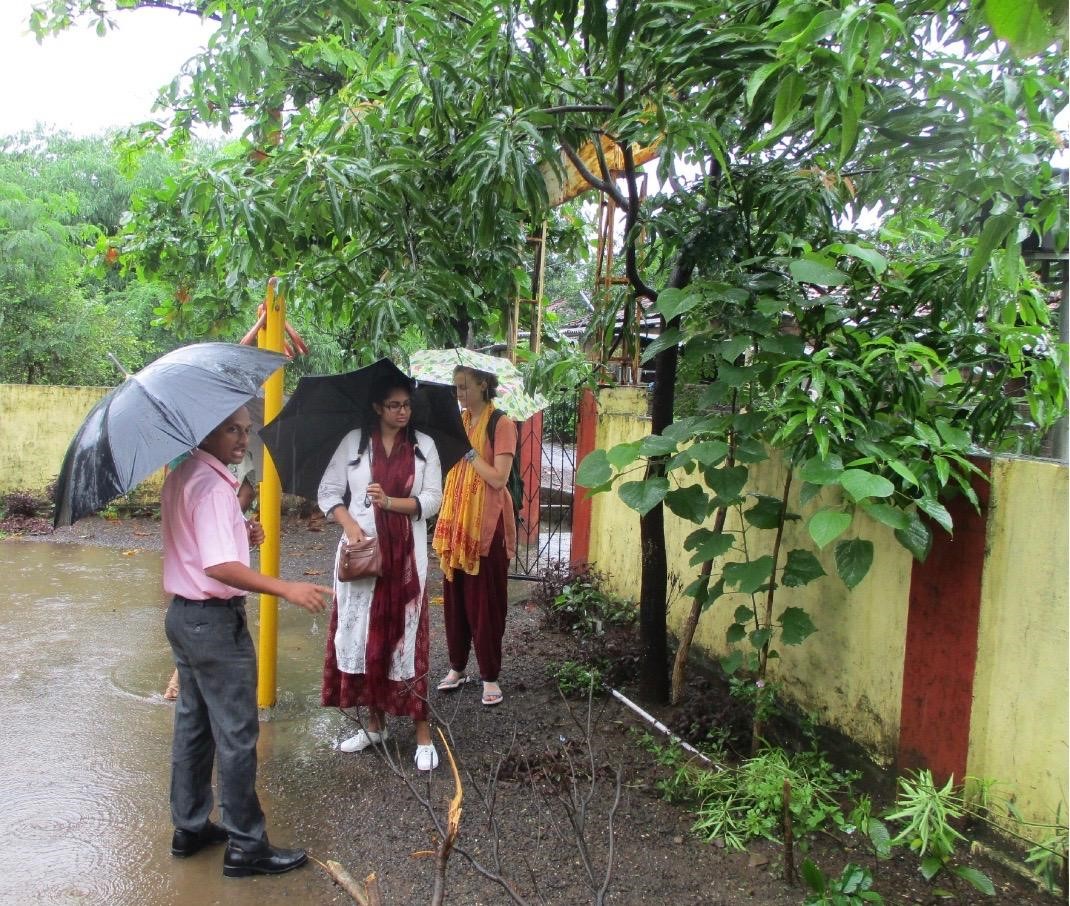 Discussing the many agricultural initiatives with Atul Patil,
as he shows us one of the saplings planted in the school in 2017

Arpita:
Our morning was filled with laughter. At one point, I got my foot stuck in the mud, and as I tried to pull it out of the soil, some mud splattered on Bhanu’s arm. In response, she flicked a bit of mud onto my hand. The students laughed as they saw our antics. They, along with one of the teachers, told us about an annual tradition among the farming families at the end of rice harvesting season (around September or October), in which the people of each village come together to throw kichad at each other from the newly cleared fields. Kneeling in the mud with ten other teenagers, laughing and planting our sapling together, made me forget for a second the differences between my world and theirs, differences that we are taught and meant to accept as we grow up. Suddenly, it didn’t matter that we lived on opposite sides of the world or that my life had been completely unlike theirs, or even that our lives might continue to be wholly different. We all simply paused and shared in the joy of planting saplings together. Seeing our work in the PRASAD fields bear fruit in this way gave me a small glimpse into the joy that students and families must feel after PRASAD delivers each sapling to a family or a school. 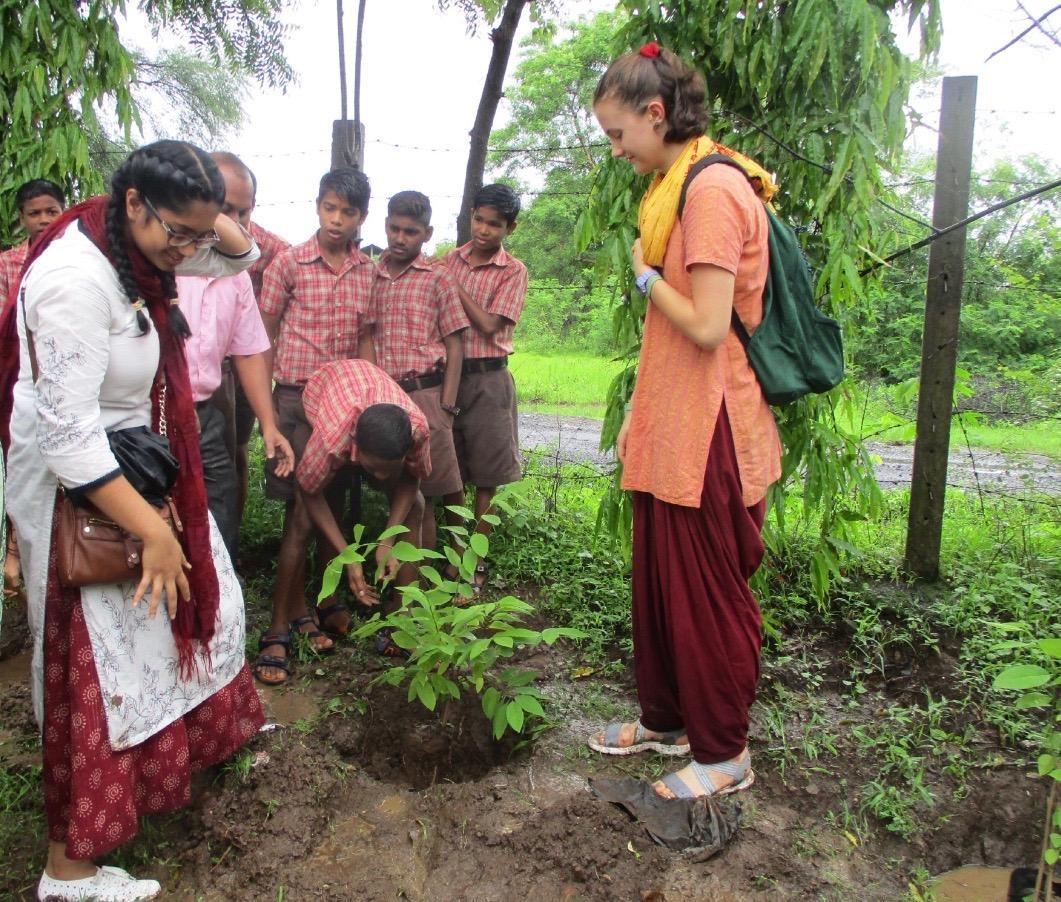 My left foot stuck in the mud, seconds before I splatter Bhanu with the kichad

Bhanu:
I have memories from my early childhood of gardening at my house with my parents. I’m not sure if you could call what I did gardening, though… my attention was focused mainly on finding the worms that hid so well in the soil. I found them fascinating, the way they seem so small and harmless, but are actually a crucial component to a garden. When I was able to find several of them while re-planting saplings at PRASAD’s tree nursery, my mind brought me back to these sweet memories and a smile instantly appeared on my face. This program taught me that simple acts have a way of going very far. All we were doing was planting saplings into new pots, and later helping students to plant their own, but what seemed like a simple effort really turned out to be so important, not just for PRASAD’s program, but for the people of the Tansa Valley as well. As I planted the saplings at the nursery and at the school, I kept in mind the importance that each of them holds. The saplings seem small now, but they will soon grow into trees and become a major part of the work and livelihood in the Tansa Valley. I really felt the connection, as well as the significance of a seemingly small act, which has made all the difference to the Tansa Valley, and to me as well. 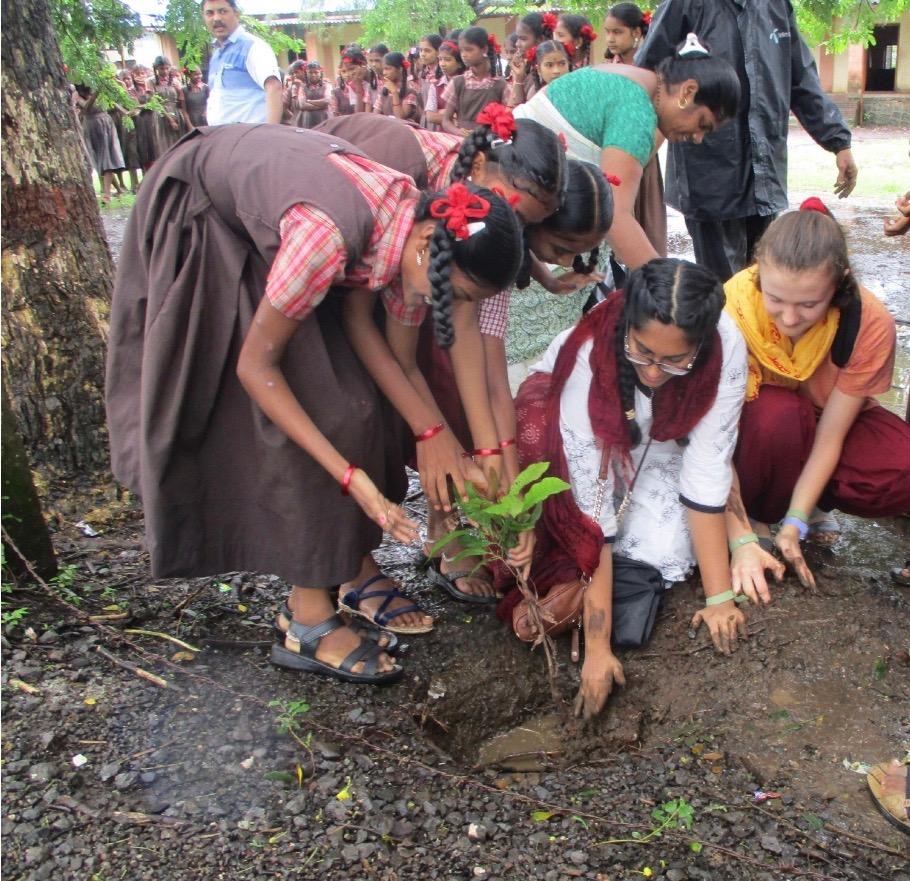 Helping some students plant their sapling

Thank you PRASAD for another incredible day learning about and participating in the agricultural programs!

Until next time,
Bhanu and Arpita