The thunderous rain trickled to a drizzle as the PRASAD Chikitsa van rolled up to Gorad Farm, a 10-acre parcel of land PRASAD utilizes for their agricultural initiatives. The greenery sparkled all around us. We arrived at the fields ready to work, each wearing a salwar kurta, a comfortable Indian-style outfit. 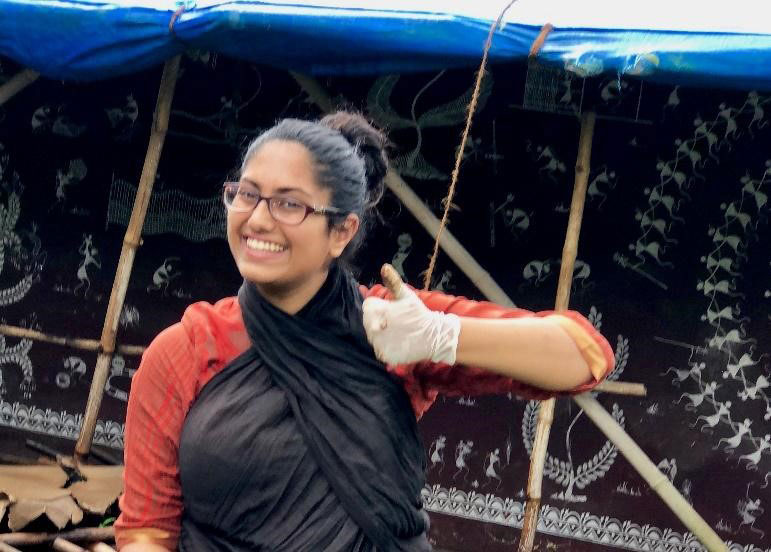 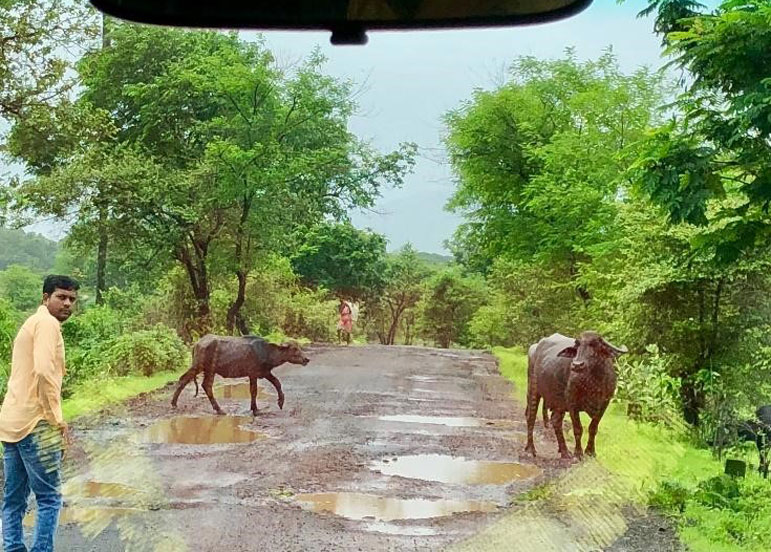 The scenery on the way to the Gorad Farm.

After putting on rubber gloves, we followed the PRASAD staff working at the farm to a clearing filled with pots of soil.  Many pots held thin green saplings, covered in water droplets that shimmered in the sun during a break from the heavy monsoon rains.

These were jamun (black plum) saplings. Atul Patil, the agricultural program manager, explained our task for the day: taking the excess saplings from the full pots and replanting them into the empty ones.

A video compilation of our day working in the fields and getting a tour of the expansive Gorad Farm.

As we began our work, the incessant monsoon rain took a rest once again, and the clouds parted to greet us with a small patch of light blue sky. The rain had left a cool breeze and a dewy petrichor (the pleasant smell accompanying freshly fallen rain). 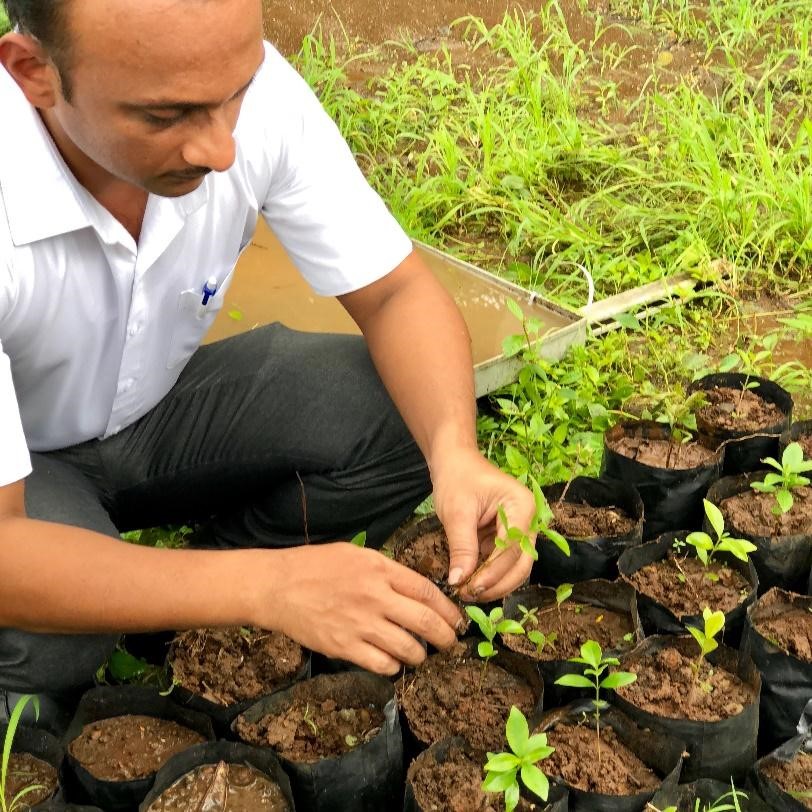 Atul Patil teaches us how to replant the saplings.

Taking it all in, we began to laugh amongst ourselves as we worked, especially when one of us would accidentally step into kichad (soft mud), from which at times our huge boots couldn’t even save us. We spoke with a staff member who had worked with PRASAD for more than 30 years, whom everyone referred to as “Kaka” (uncle).

He had a wealth of knowledge about gardening, namely the types of plants PRASAD grows, which is everything from fruit trees to vegetable plants to paddy farming (rice cultivation). 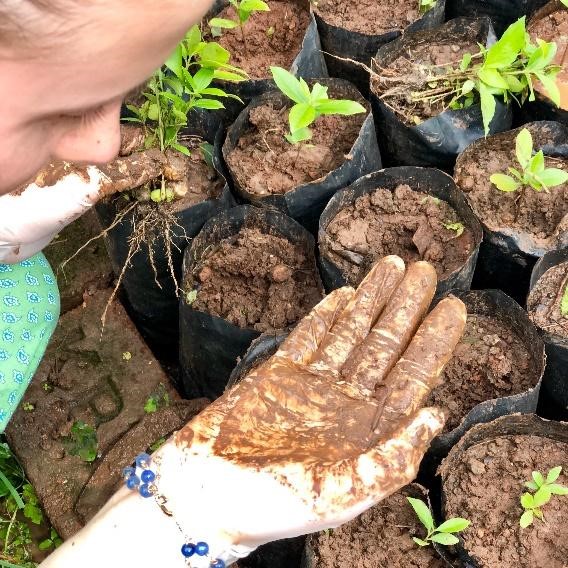 Bhanu holding a worm she found in the soil. (Arpita was holding the camera far away with a disgusted expression on her face as the farmers chuckled).

We squatted in the mud amongst the green saplings and began to remove some of them, keeping two saplings in each pot, and placing the rest in a small box. After we had a big pile, we moved over to the empty pots and began to plant two seedlings in each, where they would be cared for by the PRASAD staff for another two or three years and then sold to local farmers. 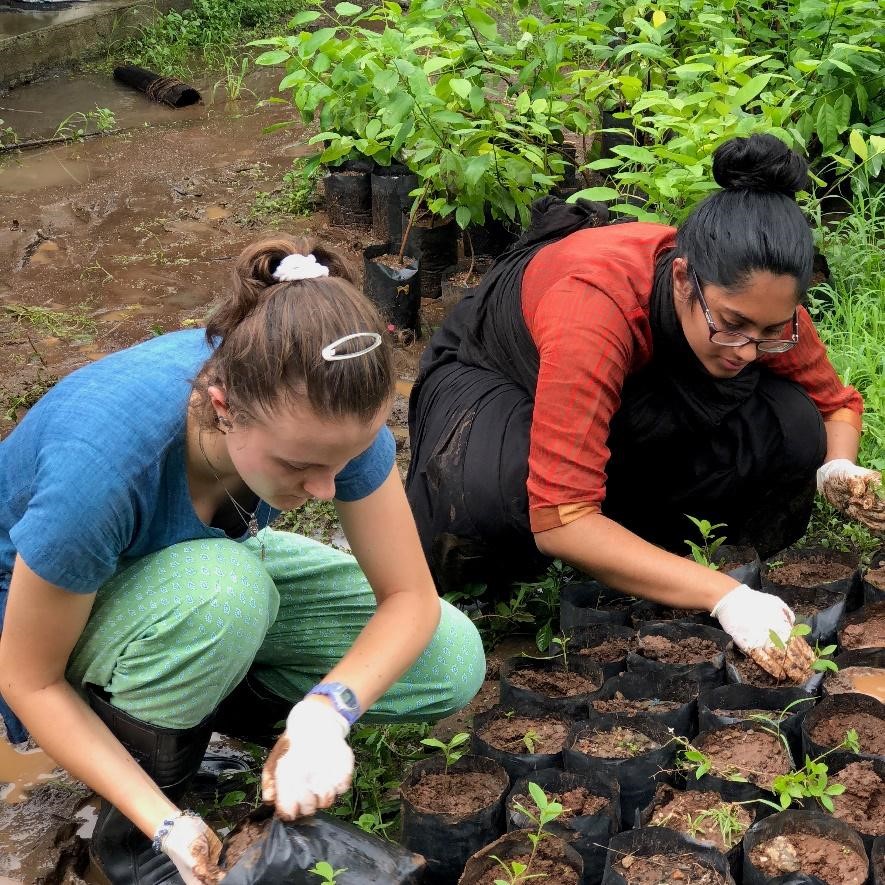 Removing the extra saplings (left) and replanting them in new pots (right).

In about five years, the jamun plant will bear fruit in the summer months (April to June), sharing its sweetness with the farmers and their families. Most trees bear enough fruit for the farmers to sell some to the community for a profit, and jamun trees prove to be extremely favorable since they don’t need to be watered as their roots go deep into the earth. 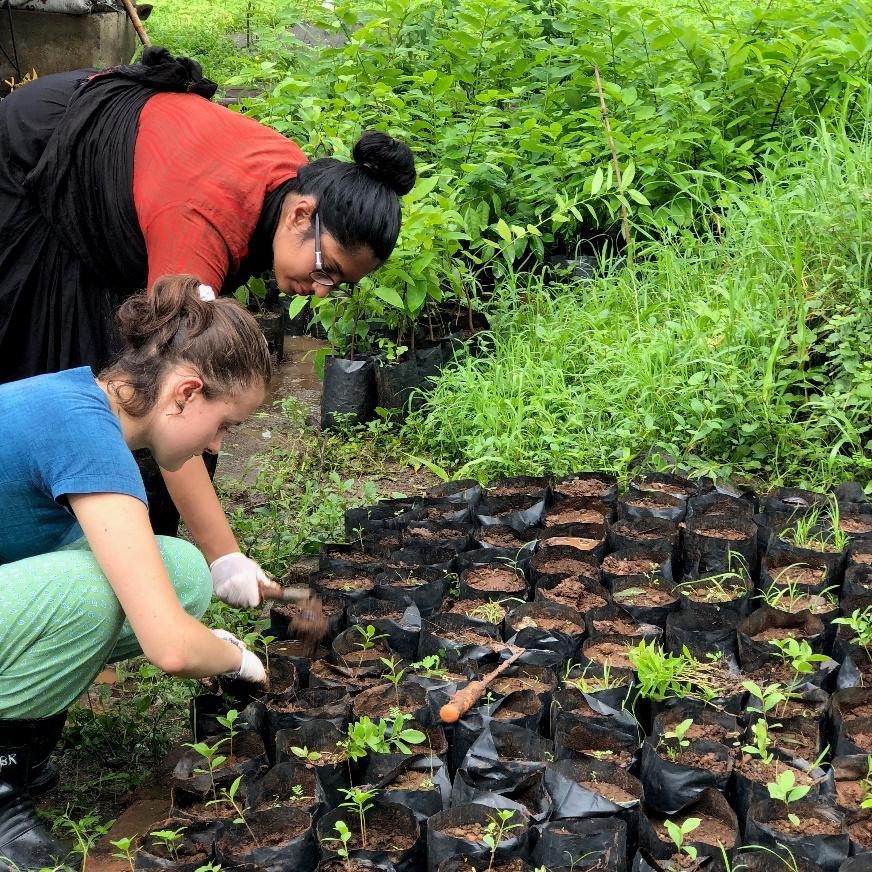 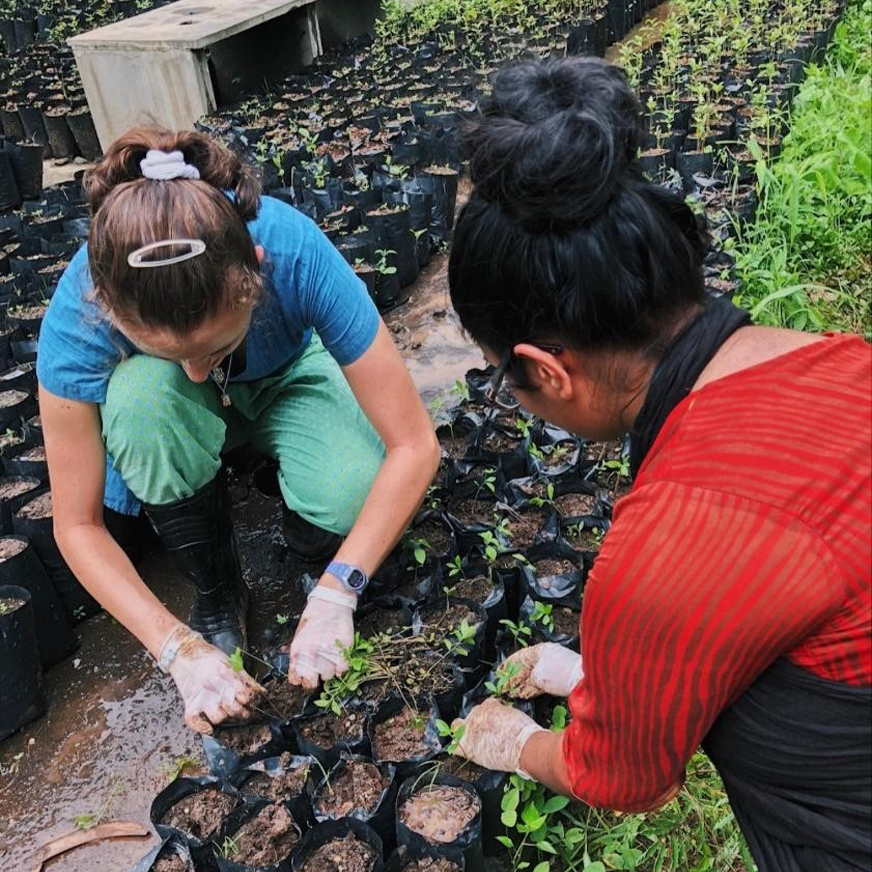 As we were about to be finished with our day’s task, the rains began to pour again, just in time to relieve us from the humidity and the hot temperature. We grinned at one another as the rain splashed down with only a few more saplings to go, refusing the umbrellas that the staff quickly offered to us. 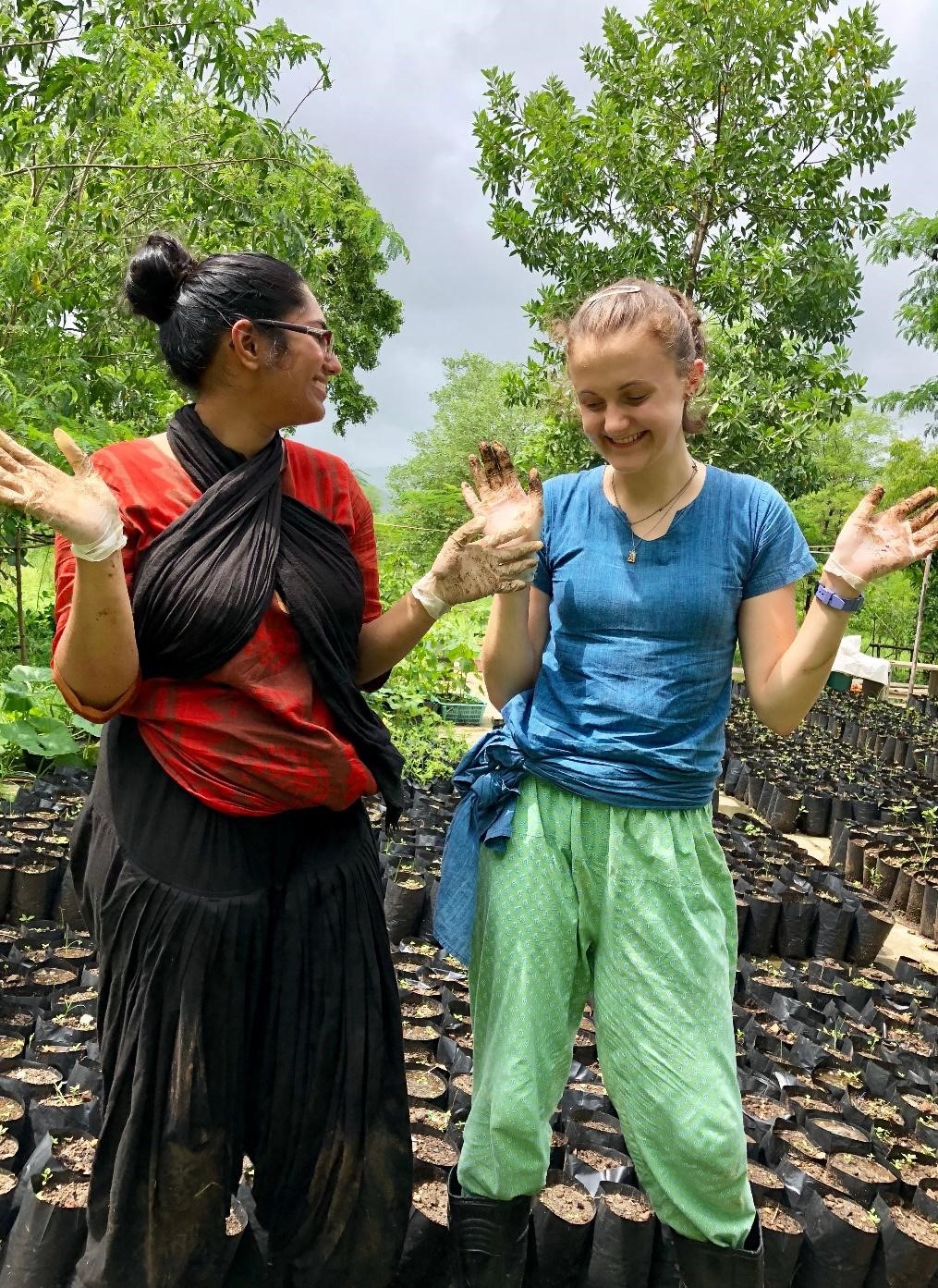 We were given a tour of the fields after completing the replanting and then began the trek through the mud toward the vast greenhouse holding rows and rows of fruit saplings. Hearing about the variety of the sweet fruits made our mouths water. PRASAD grows mango, guava, jackfruit, and jaggery plants, to name a few, as part of the Fruit Orchard Program which provides organically grown fruit saplings (which can withstand warm temperatures without much water) to local farmers. This program offers farmers a way to make a profit during the dry season when many other crops are unable to survive. We learned that without the option to grow and sell fruit local farmers often had to leave home to look for work during the brutal dry season. 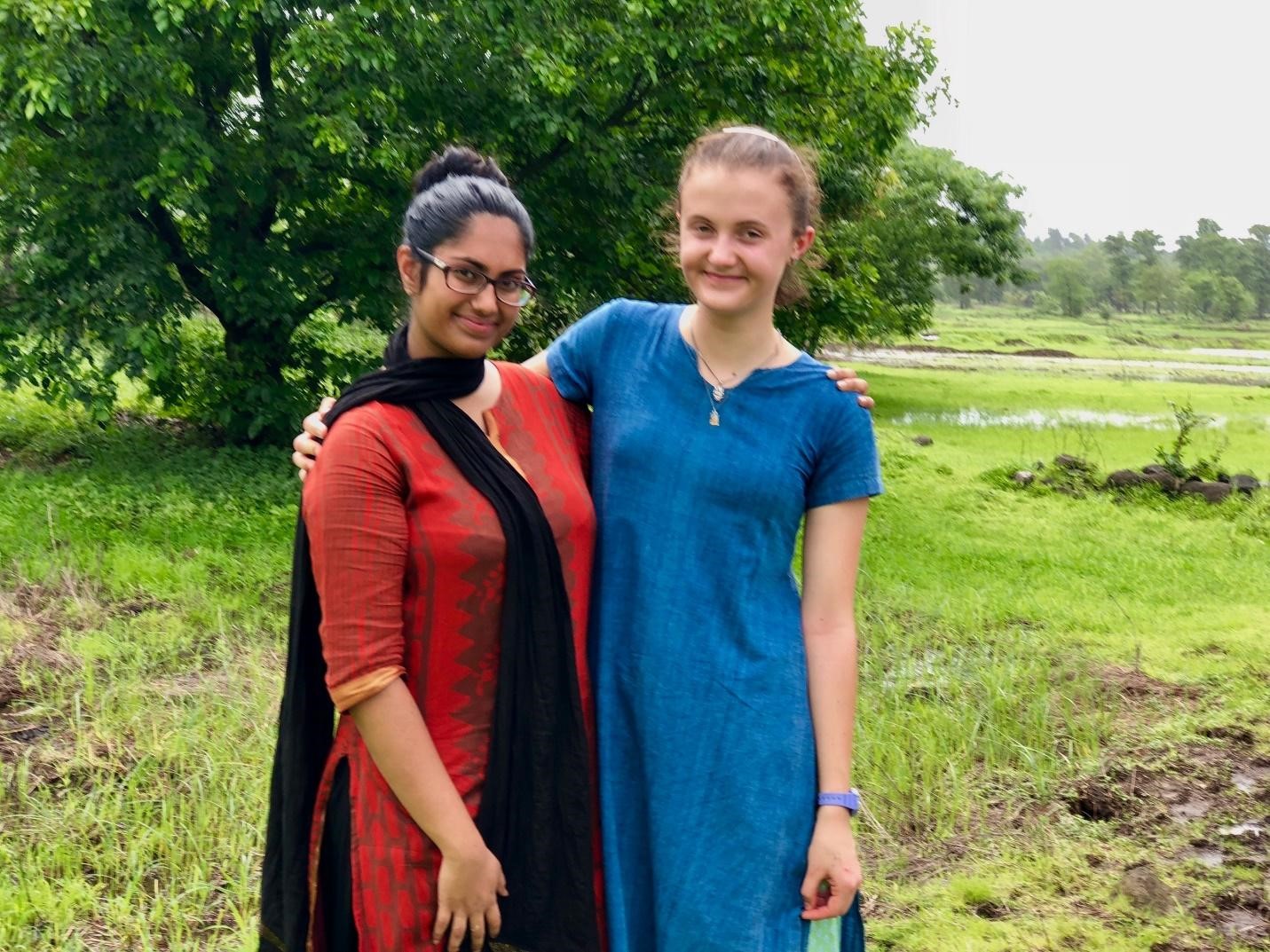 Smiling with the PRASAD fields behind us.

PRASAD offers support for families in the Tansa Valley to grow their own food organically. PRASAD ensures their commitment by charging the local farmers a small, discounted fee. Since each sapling purchased becomes an investment, it is likely to receive proper care. This, we learned, promotes sustainable development, one of PRASAD’s main goals in the Tansa Valley.

We felt so lucky to be part of such an amazing program and went back to the PRASAD office with an idea of how important these small green saplings are to the lives of so many farming families in the community. Thank you, PRASAD!

Until next time,
Arpita and Bhanu