A sweet smell wafted toward us as we climbed up a set of wooden stairs to the PRASAD kitchen. After removing our shoes by the door we entered a small white room, furnished with only a huge steel pot resting on a stove that matched its size. The pot contained gallons of boiling milk that two PRASAD staff members were stirring. They asked us if we would like to mix in a little sugar, which we did enthusiastically. Our next task was to pour the milk into separate canisters by dunking a pitcher into the enormous pot and then straining the milk as we poured it into each canister. Once they were filled, we loaded them onto motorcycles, careful to secure the lids well enough for them to survive the bumpy roads. 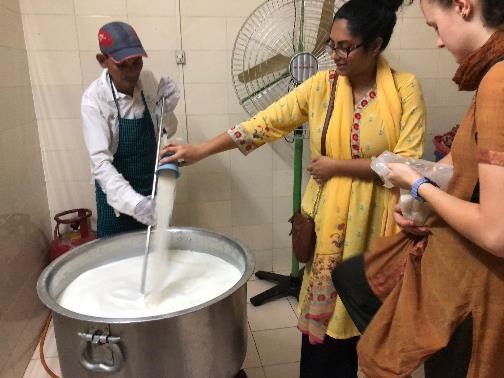 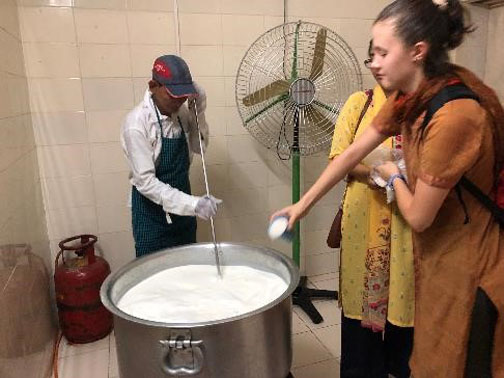 Helping the cook prepare the milk

This was in preparation for PRASAD’s nutrition program, in which members of the PRASAD staff visit schools each morning, six days a week to serve milk and other nutritional supplements such as sheera, matki sprouts, and bananas to young children, pregnant women and nursing mothers. Several motorcycles and vans driven by PRASAD staff members departed from the office, equipped with two giant canisters of the specially prepared milk and pots of the nutritional supplements. The program was created as an effort to combat the low immunity levels, and physical hardships undernourished children in the Tansa Valley face due to insufficient nutritious food.

Milk jugs in hand, we arrived at the first anganwadi (nursery school) ready to serve the children the milk that we helped prepare. 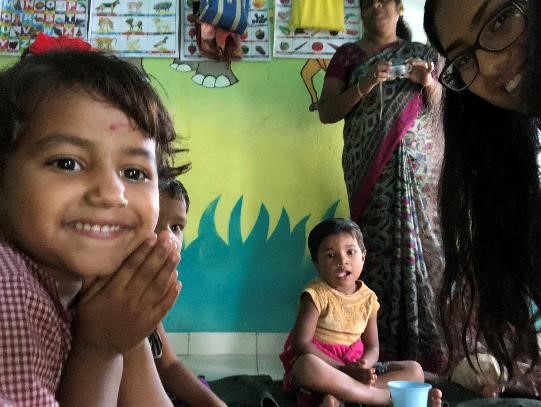 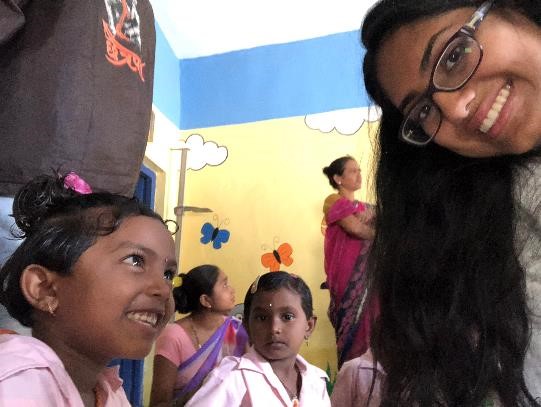 Once we arrived, we took a few minutes to talk with the kids before the milk was ready for us to pour. Some of the children were fascinated by selfies and wanted to take some (and then immediately grabbed my phone to see their photos and try for themselves). 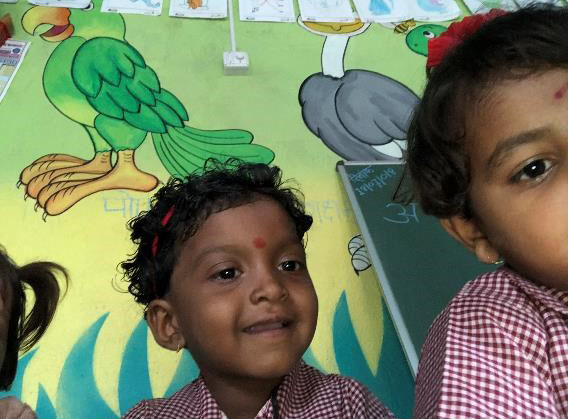 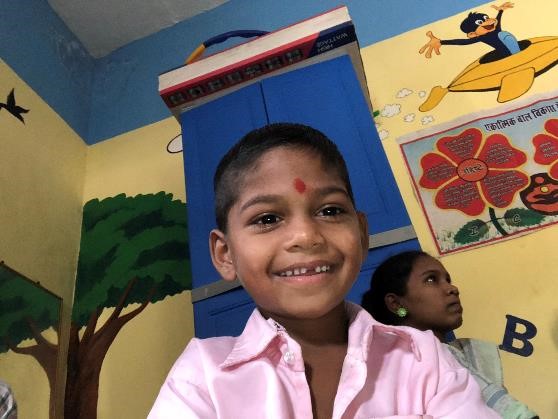 We had some successful selfies from the kids!

They all stood as soon as we walked in and uttered a very energetic, “Good Morning Sir!” with their hands together in a traditional namaste. Their eyes widened upon realizing that we were not the “Sir” they usually find serving them milk every morning, but two teenage girls.

“Hello! Namaste,” we exclaimed as we began to pass out blue cups to everyone. With the initial surprise gone most of the kids waved back. We filled our jugs with milk from the canisters secured to the motorcycle parked outside and got to work serving each person one cup of milk. 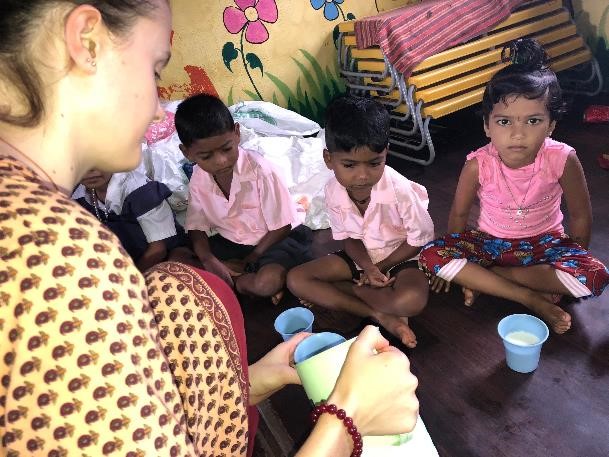 Bhanu serves milk to some of the children

As one member of the PRASAD staff, the “Sir” mentioned above, transferred the milk from the big pot into smaller jugs, we talked to the kids in the few Marathi words we had picked up. We asked them their names (Tuzha nao kai) and how old they were, most of them holding up fingers or looking to the teachers for help in response to the latter one. 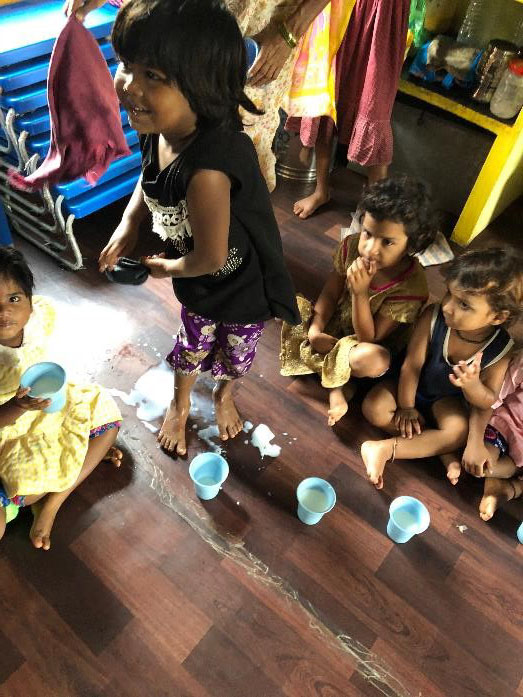 We were careful to give each of them the same amount of milk, while also trying not to splash or spill. Some messes were made by a few of the recipients, but it only resulted in more laughter and smiles filling the room. 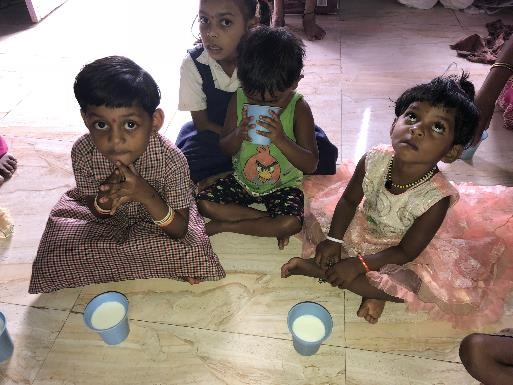 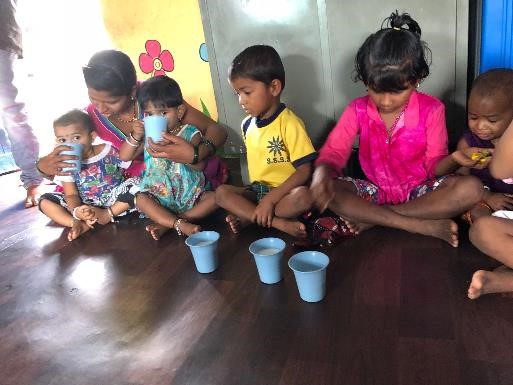 A video compilation of our time working with the Nutrition Program, beginning with a glimpse of the milk preparation in PRASAD’s kitchen.

Bhanu:
When we arrived at the first anganwadi, I couldn’t help but smile when my eyes fell upon the brightly painted murals covering the building. From outside we could hear a huge amount of laughter and happy chatter coming from the children, surrounding us as we walked through the door. Seeing so many bright, smiling faces has a way of dissipating all of those thoughts and worries that accumulate in your mind. This is what I love about children: I am able to be fully present and in the moment when I am around them. 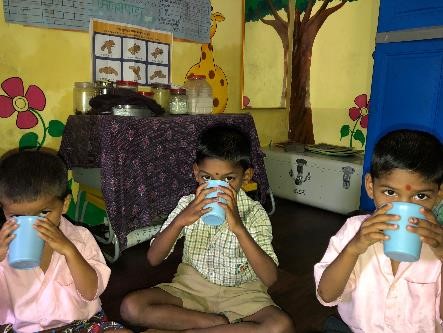 Three boys race to see who can finish their glass first, leaving adorable milk mustaches once they had declared a winner

I remember being three or four years old walking out into the kitchen with my freshly combed hair and mismatched outfit, all ready to go to school. Waiting for me on the table was my favorite breakfast: toast with butter, topped with my favorite raspberry jam. I could always count on this to start my day. Do you have a similar memory? The cup of milk the children receive every morning is a very significant part of their early life and daily routine. They count on this cup of milk, just as I counted on my toast. It is more than just nutrition that is provided for them. They trust that the milk will be there; this continuity, morning after morning, provides comfort for the children, leaving me to think, “What importance does a cup of milk hold?”

Some of the kids wanted to share new songs, nursery rhymes, and prayers that they had learned in school with all of us. Here are three of our favorite performances!

Arpita:
As I served the children the sweet milk, I remembered my own nursery school days, when my mother used to make me hot milk with spoons of sugar whenever I had trouble falling asleep. Grinning at this memory, I took in the scene around me… One five year old boy was attentively drawing his family on a small chalkboard, paying no attention to the kids around him. Others talked incessantly with each other, running around and trying (used loosely here as we had some spills) to avoid the cups full of hot milk. Some of the younger ones even began banging their cups against the floor, impatient for their milk and in awe of the music they were making. They were so free of any judgement or fear or norms, simply expressing themselves the only way they knew how – genuinely and completely. Personally, a lot of my decisions are influenced by a slight fear of judgement or by the idea of how people might perceive me. Observing the simplicity and confidence of the children around me, and how unapologetically happy and present they were, reminded me of how important it is to make decisions free of this worry. 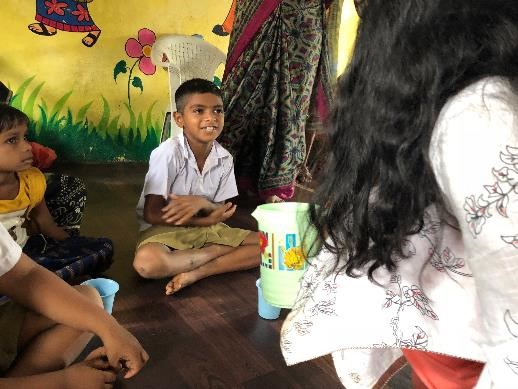 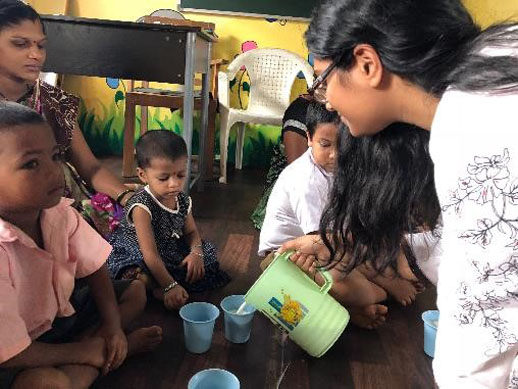 Thank you PRASAD for this incredible opportunity!

Until next time,
Arpita & Bhanu