Over the past week, I visited two different Self Help Groups, sponsored by PRASAD Chikitsa, both of which taught me so much and opened my eyes to many of the pressing problems that women face in rural India.

The first meeting, held in a small temple, was a training meeting. A PRASAD staff member taught a lesson about village development and a bit about the taxation system in Maharashtra, to the women. 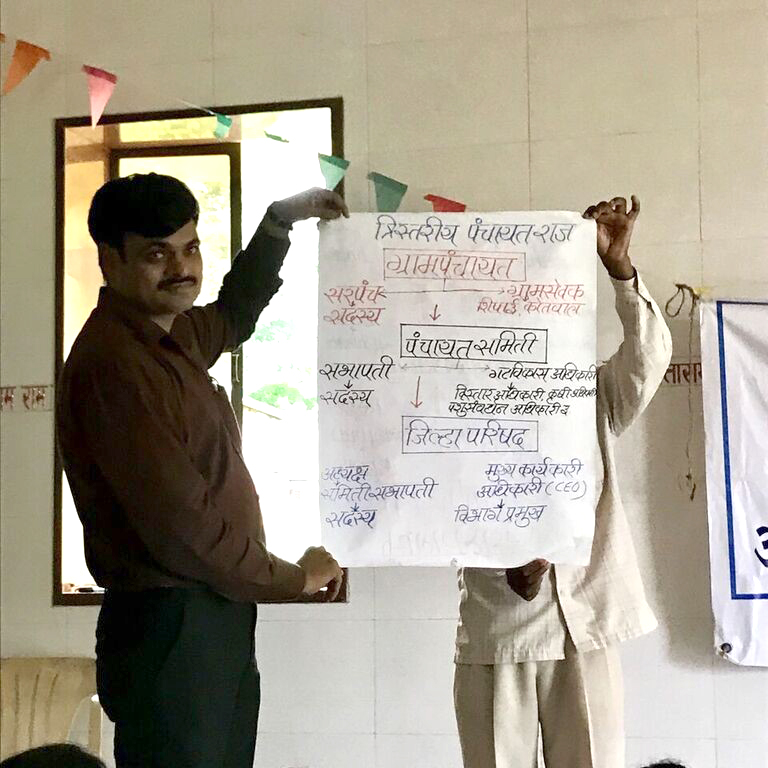 I was amazed at the reactions some of the women had to a few of the things the staff member was saying. For example, some were surprised when they learned that they too, could be people of power in the government, such as the prime minister or the president. This made me realize the importance of PRASAD’s Self Help Groups.

Many women in rural towns like those in Tansa Valley are victims of domestic violence. Before the groups, a majority of the women couldn’t do anything about this horrendous crime, because leaving their husbands or calling the police meant no source of income for them and their children. Now, after joining the Self Help Groups, these women have been able to find a way to save their own money and no longer rely on their husbands for financial stability. This made it much easier for these women to stand up to the abuse they faced, and to start afresh, with the money they had saved and the support and friends they had gained through the Self Help Groups.

Back at the first meeting, I met a 3-year-old girl named Arya. She was sitting in her mother’s lap in the back row, with a big smile on her face, constantly speaking non-stop to her mother and telling her stories in Marathi. I smiled at her and introduced myself, her mom translating my Hindi for her. 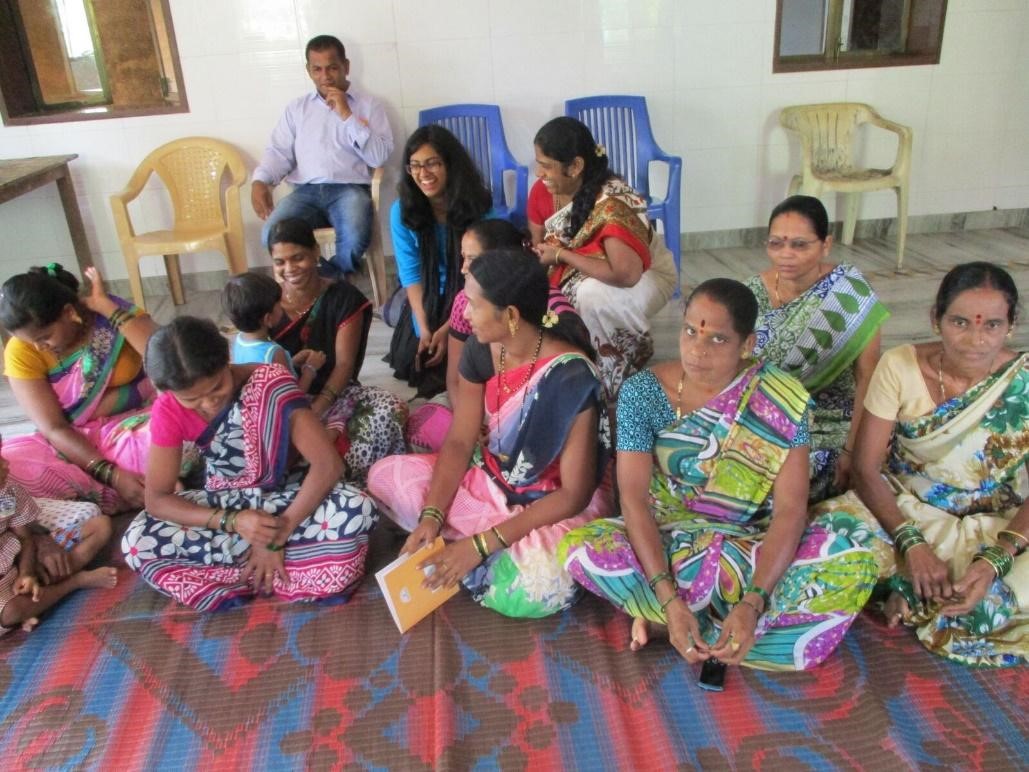 Meeting Arya for the first time before the meeting started

She waved at me and then pulled me to the back of the room so we could play together.  I asked if I could take a picture of her. Nodding, she posed and then grabbed my phone to see the photo I had just taken.

Arya learned how to use my phone almost completely in the next ten minutes. She saw me type in my password once, and then every time the phone would turn off, I would see her typing it into my phone. She loved taking selfies and photos of the meeting going on in front of us. She even figured out how to use my Snapchat and attach Bitmojis—which she was thoroughly fascinated with— and send them to my friends. She had me read the English writing on at least ten of the Bitmojis (YAY, Yum, Hi, etc.), and tell her what they meant. In fact, I had to translate them to Hindi to tell one of the PRASAD Chikitsa staff sitting next to me, so she could, in turn, translate it to Marathi. 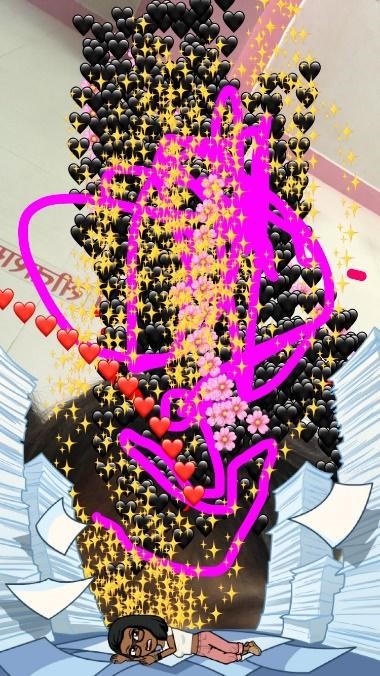 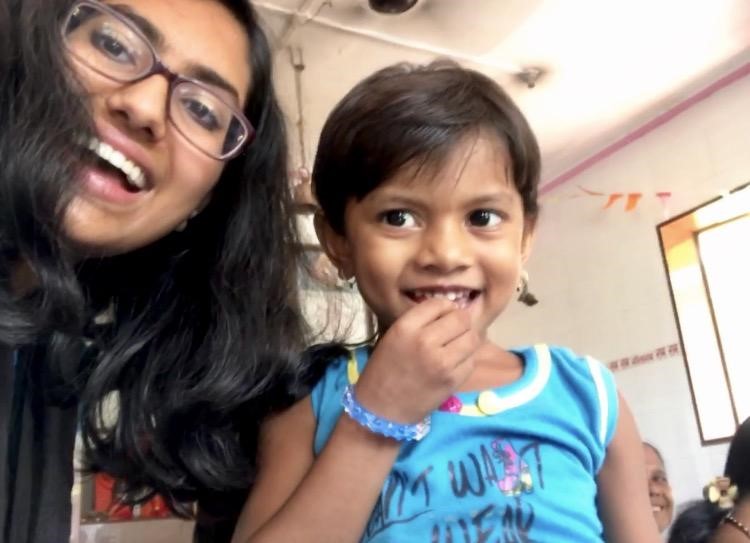 Arya’s masterpiece that she created on my Snapchat; Arya and I taking a selfie.

One time, I felt that she should listen to part of the training in the meeting, so I discreetly turned my phone off from the button on the side and told her it died. She looked at me and explained as she took the phone from my hand into her own, “No it’s not; you just have to press this button on the side.” With that, she turned it on again!

Throughout the meeting, she kept eyeing my mint green nail polish and kept asking—in Marathi, her language— why I had different colored nails than her. I don’t speak Marathi, so for a while, I couldn’t answer her. When someone finally told me what she was saying, I laughed and explained to her that it was just temporary paint for my nails. She nodded and reached out to feel it.

As the meeting concluded and the PRASAD Chikitsa van pulled up out front, Arya asked why the van was there. I told her that it was there to take me home from the meeting. She paused and then asked me, “Do you have permission to go back?” I laughed and said that I did, as I had only come to attend and help in the meeting.

I laughed and said that I did, as I had only come to attend and help in the meeting.

Then, Arya shook her head and explained to me, “No you don’t. I’m not allowing you to leave.”

My heart melted at the simple way she told me this, and at the pure innocence and uncomplicated happiness in the way she talked to and approached people.

When it was finally time for me to leave the site, she dragged her mom to the van with her so they could see me off. Tears in her eyes, she hugged me and told me to bring her some nail polish when I come back. Meeting Arya, with her sweet smile and extremely talkative personality, was one of the highlights of my visit.

I was moved by how welcoming the women were in both meetings. As soon as I came in the room at the second meeting, the women stood up and greeted me with the traditional, Namaskar, and their hands folded in front of them. I did the same, smiled, and introduced myself.

They invited me to join them and participate in the meeting. We sat in a circle on the floor as the women explained their lending system, borrowing money from their joint bank accounts. They showed me each of their “cards,” a log of how much they had each put into and drawn from the account (I touched on how the system works in my previous post). 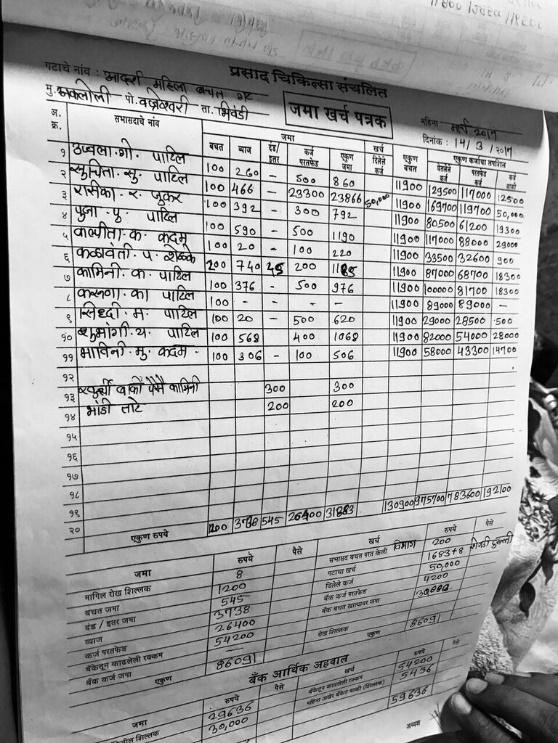 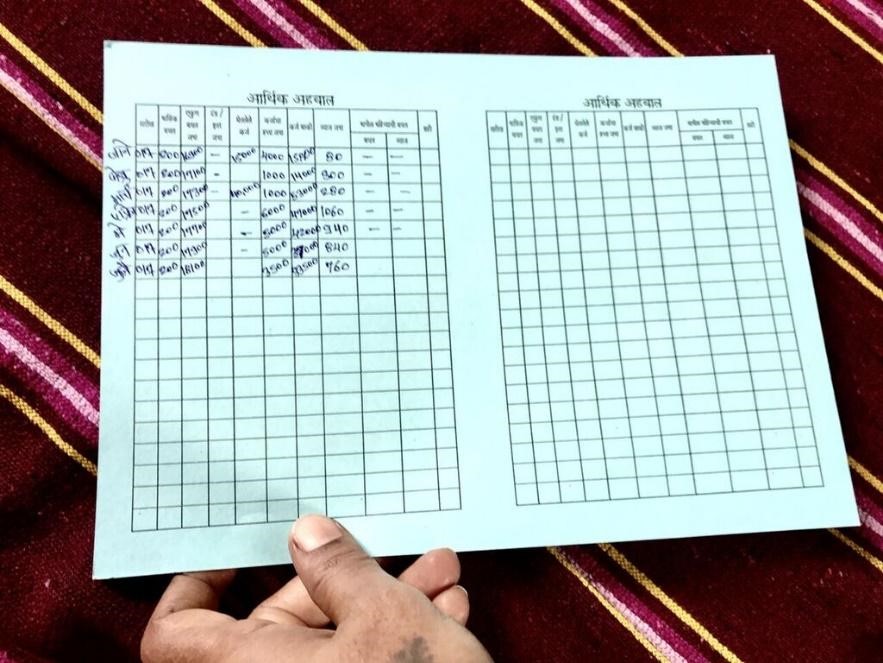 To the left is a log of every woman’s financial balance in the group, and the right
shows an individual card that each woman uses to keep track of her own finances.

Talking and laughing amongst themselves, they spoke of how their families were, and shared different anecdotes about different people in the village, just like old friends catching up. They treated me like an old friend, including me in what they were doing and the stories they were recounting.

The women handed me some cash to count – everyone’s monthly contribution – and laughed when they found that I didn’t know how to count in Hindi. I laughed along with them, especially when I had to pull out my phone to Google Translate the amounts from English to Hindi. 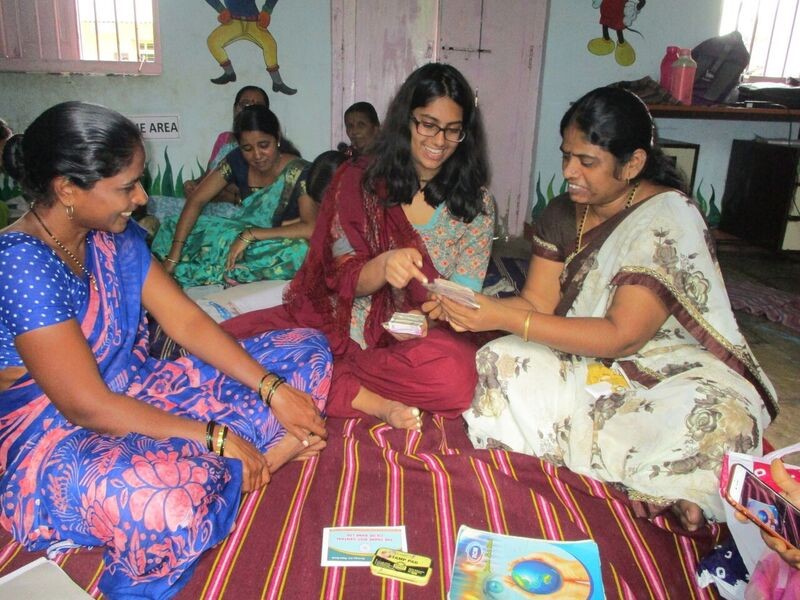 Counting money with the women

I was very inspired, too, when they told me about their business. The women had been meeting for the past fourteen years, and six years ago, they started a business together.

It became a way for them to be more independent (the financial stability meant that they didn’t need to depend on their husbands for money), as well as a way for them to contribute, even in a small way, to India’s economy. They saved their money to buy industrial cooking equipment and now rent it out to people in the community who need them for weddings or other special events.

These meetings and everything I had learned about the Self-Help Groups from the PRASAD Chikitsa staff were extremely eye opening. I had never even imagined some of the problems that women from rural areas like these might encounter, and was even more impressed and inspired by every challenge the Self-Help Groups were helping them overcome. 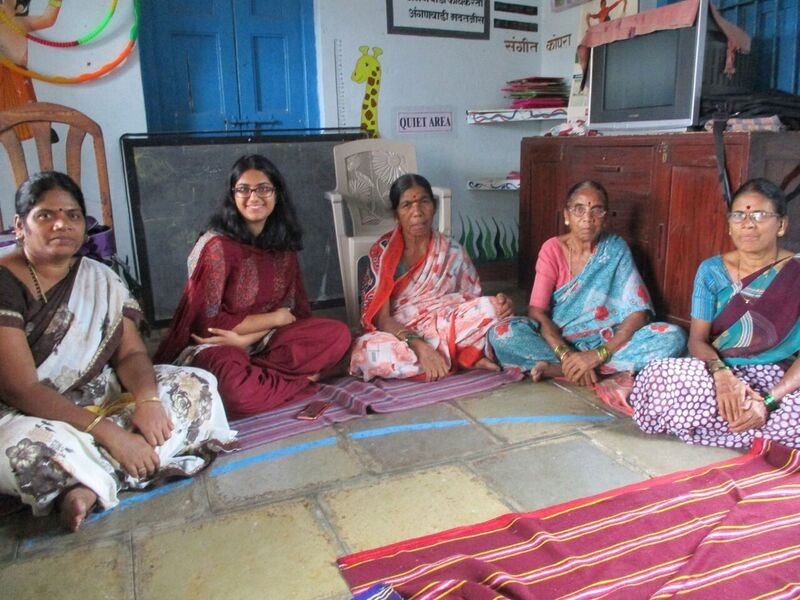 A few of the women from the second Self Help Group,
one of PRASAD Chikitsa’s staff (far left) and I before the meeting began.

Being a part of the meetings, and being able to help out in any way I could – whether it was helping count the money, or taking care of a girl whose simple and carefree attitude stole my heart, I am so, so thankful for this amazing opportunity PRASAD has given me!