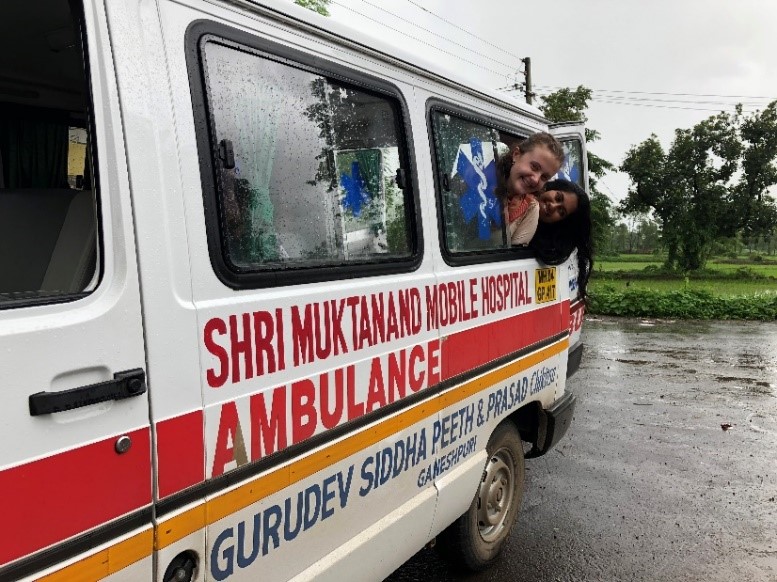 Arpita and Bhanu in the Muktananda Mobile Hospital.

We arrived at the PRASAD office excited for a morning volunteering with one of their general health programs – the Shree Muktananda Mobile Hospital. Parked outside was the Mobile Hospital Van, filled with medication and extensive medical supplies.

The Shree Muktananda Mobile Hospital travels to many villages in the Tansa Valley on a regular basis to provide affordable health care to the villagers in an accessible way. This effective and reliable method of delivering medical care to people living in remote villages removes the obstacles of time and distance. Just last year, for example, the Mobile Hospital provided over 3,700 people with screenings, health care, and wellness education. We traveled to three different locations over two mornings, each place bringing new people and scenery.

Arpita in the Muktananda Mobile Hospital.

We first arrived at a small clearing with miles of farmland on either side of us. Parking the van next to a small covered gazebo, we began to set up for the morning’s mobile hospital. People soon began to arrive, and we directed them to a small ‘registration’ station, then to the doctors for a check-up, and finally to the van where members of the PRASAD staff filled their prescriptions. Bhanu helped with registration and took notes for the doctors as they carried out the checkups. I helped distribute medications and explained their use to the patients. 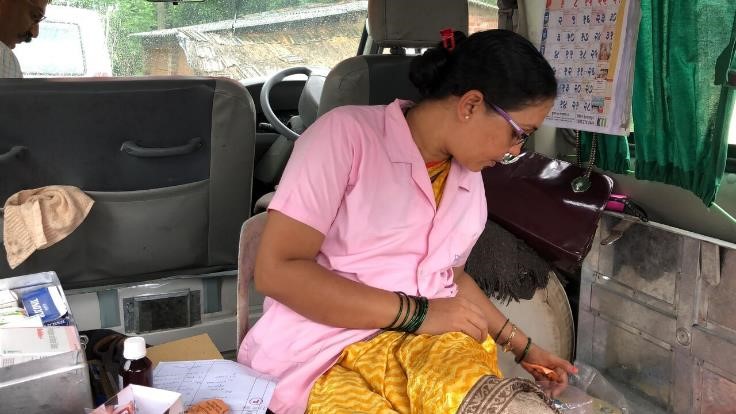 This member of PRASAD’s medical staff is finding the prescriptions for a patient. 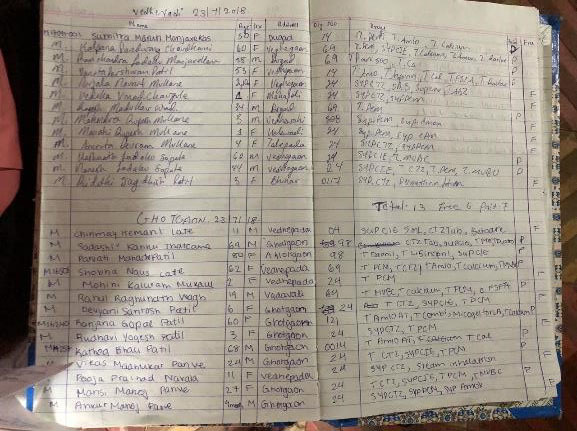 A full page of the register book Bhanu and Arpita both wrote in to check in each patient.

As most of the villagers spoke Marathi, we quickly learned a few words and phrases in order to dispense the medicine (such as when to take each medication), although slip-ups in pronunciation were always followed by laughter. 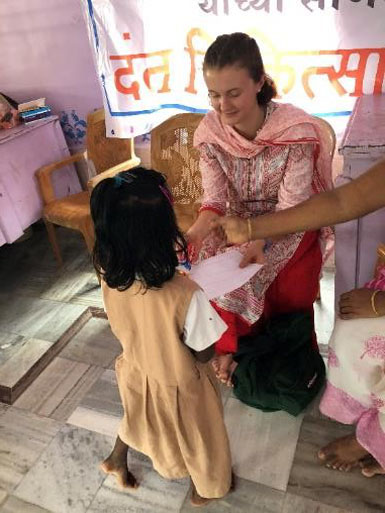 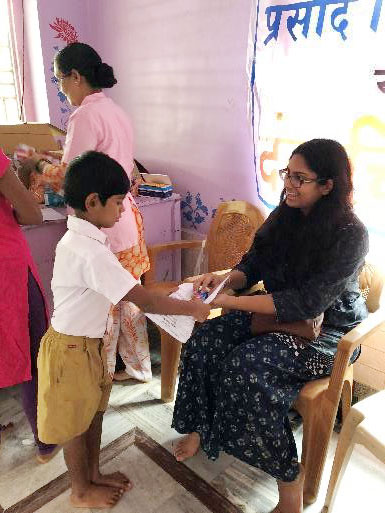 Bhanu and Arpita each explaining to two young patients, “Brush twice a day.” in Marathi.

A light drizzle ensued, doing nothing to dampen our spirit, as we continued to work out of the covered area and the van. People continued to file in, many with farming related injuries. I was surprised to learn that almost all the women and girls that came were severely anemic, due to improper nutrition during their menstrual cycles. We distributed iron supplements after scanning their medical forms, which usually included other prescriptions.

PRASAD charges adults a small amount for the medication (only those who have enough money to afford it) usually around 10 rupees, about .14 US, to ensure their commitment to taking the medicine regularly. By paying a small fee, the adults are more likely to take their medication as directed, as they themselves have made an investment.

Later, we set up the Mobile Hospital in the local village temple, this one a specialty dental health camp. A lot of children and teens came to this one, and sure enough, the room was soon filled with contagious giggling. Four children were busy playing a game resembling soccer (with a bit of tackling), all of them looking up at us when we arrived. 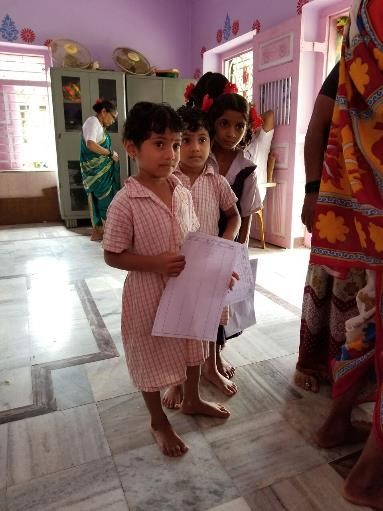 These young girls are waiting in line for their prescriptions.

One four year old girl became quite interested in my phone and after mastering good selfies, she found my Snapchat App. She showed her friend, and both of them quickly figured out how to take a video of themselves and then decorate it with red and orange scribbles.

Our third location was by far the busiest, located between two buildings in the heart of the village. I spent the bulk of time registering patients and as I was filing their records from the past year, I realized how much people’s health was improving over the past year alone; those who were severely deficient in certain nutrients and vitamins previously were now showing great improvement. 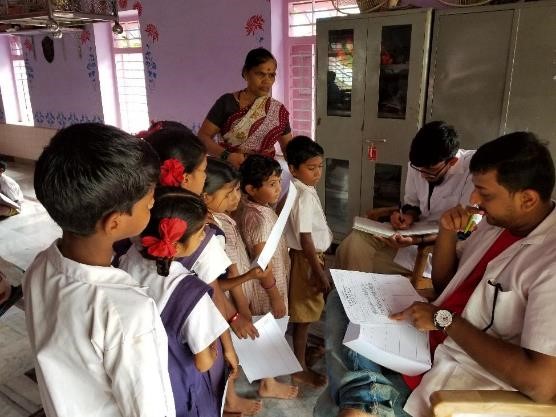 At this site, when I asked one of the women if we could take a short video clip of her, she gave me a wide smile and responded with an enthusiastic ‘Yes’. Her friend mentioned that she loved the camera very much, which made all three of us burst into laughter. 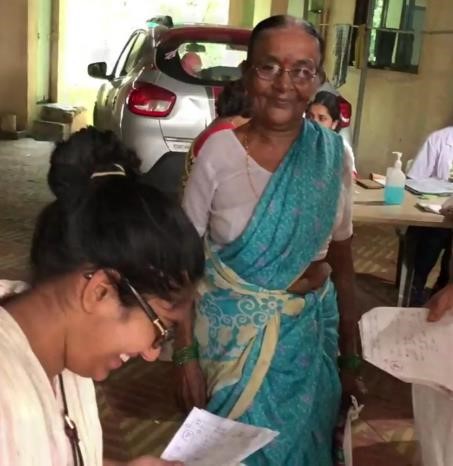 Arpita with the woman who loves the camera.

I was amazed at how much each person trusts the PRASAD doctors for the medicine they are prescribed, all of them regularly coming back to the Mobile Hospital for routine check-ups and refills. Before PRASAD, proper health care for people living in these remote villages meant travelling many kilometers and paying extremely high fees for simple checkups. I was very moved to witness first-hand the easily accessible and affordable way in which the PRASAD doctors and staff provide excellent health care to the people in the Tansa Valley.

I began to feel nervous when we arrived at the location of our first Muktananda Mobile Hospital visit. This was one of my first days with PRASAD and I was trying to get used to not being able to communicate verbally with people. I thought to myself, “What will I be able to do here with this program? I can’t speak with anyone!” But not knowing Marathi, the common language of the people in the Tansa Valley, proved to be only a minor setback at the beginning, that is, until I asked myself a very important question: “What do I have to offer?” My answer came rather quickly… a smile! 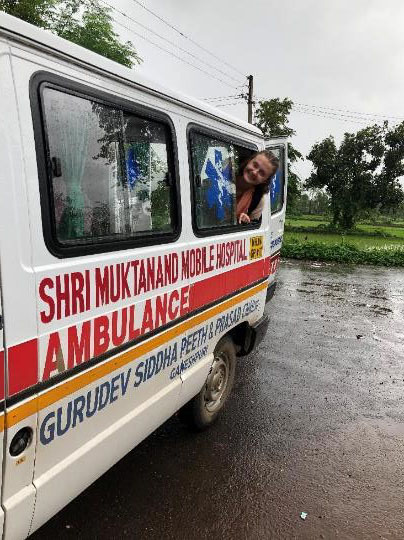 Bhanu in the Muktananda Mobile Hospital.

Whenever a patient came up to me to sign in or when I was handing out their prescription I offered them a smile. I began to feel more relaxed once the patients responded with one of their own. They were often quick to do so, and I felt even better when I saw the kindness shining in their eyes. I felt them say, “Welcome!”  with that first smile and, “Thank you!” with their last. What a wonderful way to begin and end an interaction. The patient and I would be caught in the moment right then and there, and this pause allowed us to appreciate each other’s company for a brief moment in our day.

Just a small gesture or action can say so much. I am grateful that I was able to learn the importance of just offering a smile. I feel that we often forget in our busy lives that these acts, as simple as they may be, really do hold such tremendous power. I hope to remember this as many times as possible throughout my life, not just when I can’t speak with someone, but even when I can. Then I will be brought back to those blissful days of being with the people of the Tansa Valley.

Thank you PRASAD!
Until next time, Arpita and Bhanu

Tweets by PRASAD
We use cookies and other identifiers to help improve your online experience. By using our website you agree to this. To learn more, including how to change your settings, see our cookies policy.OkCookies Policy