We entered a small building decorated with a variety of drawings, housing a space for local children to come and partake in arts and crafts, providing them with resources to express and further develop their own unique artistic style.

Upon arriving we were greeted by several young boys, all of whom were occupied with their craft of the morning: making a beautiful tree out of plastic bottles by cutting two bottles in even wide strips (tree branches), and then gluing them together. The boys later added beads and paint, along with a painted plastic stand to make the tree really stand out with their own individual creativity. 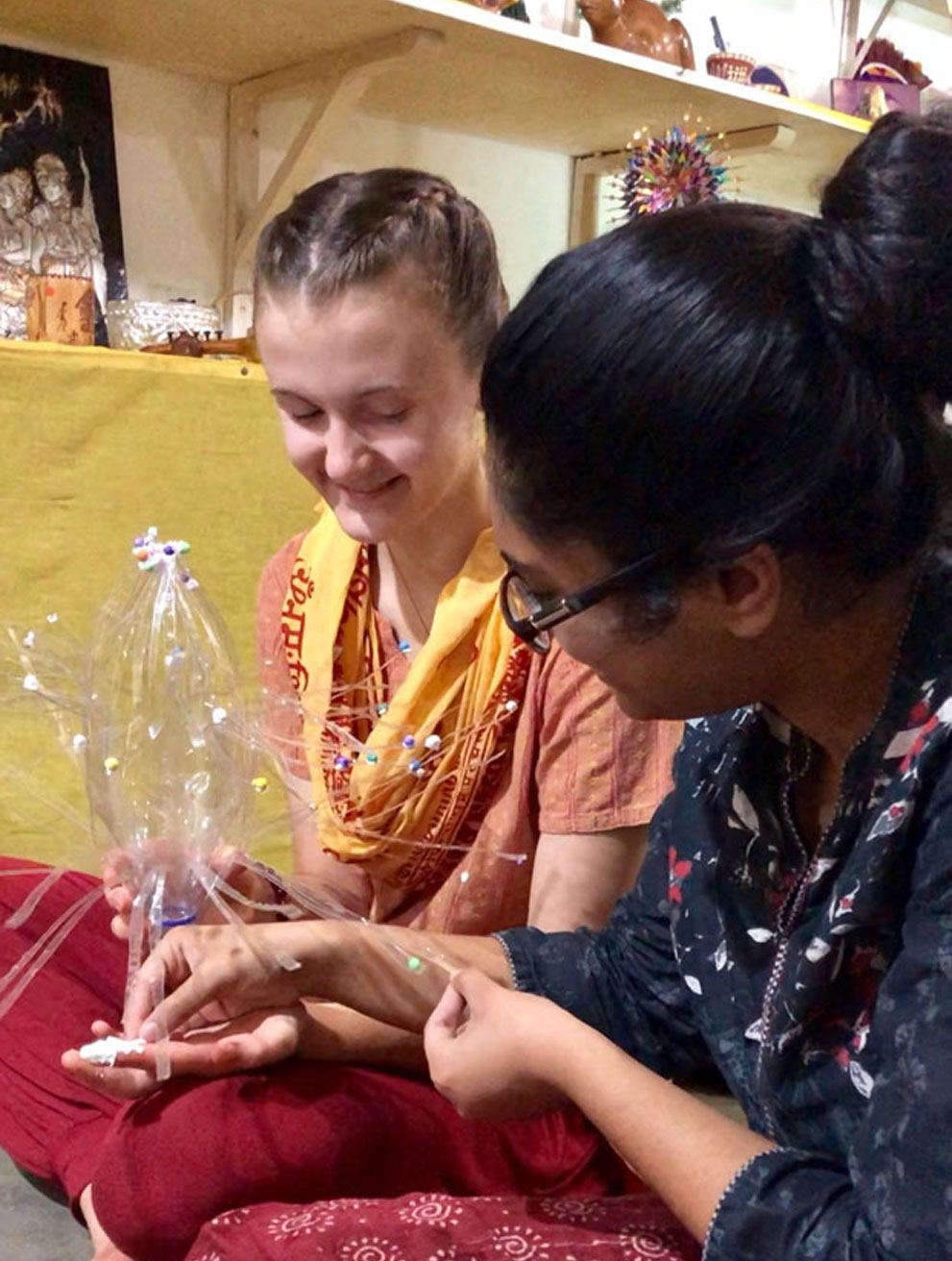 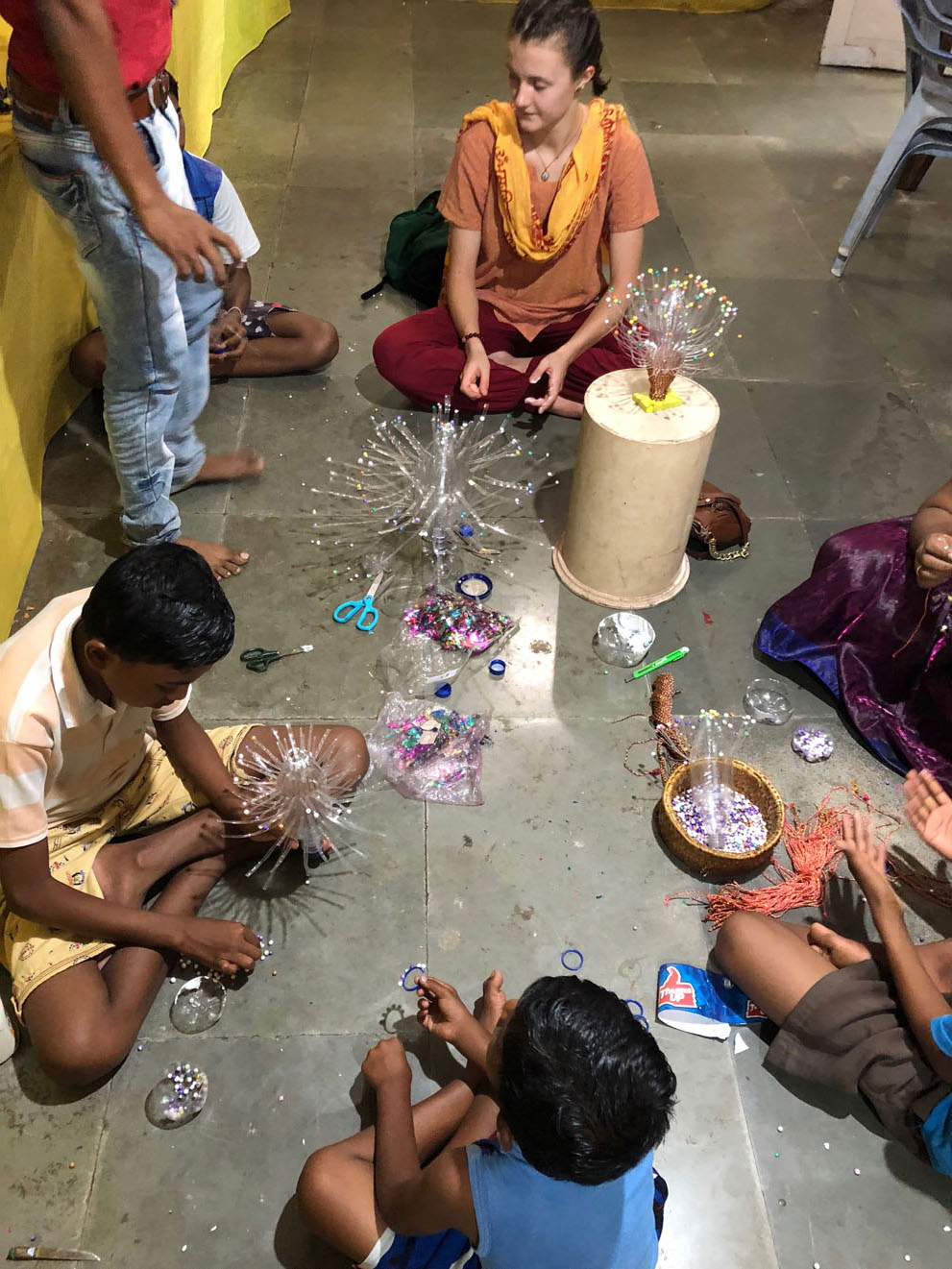 Their concentration motivated us to take our places on the floor next to them and learn how to make one for ourselves. The task at hand proved to be harder than we had anticipated as cutting even strips out of the plastic is easier said than done. Precision was not our strong skill for this particular step, and as a result our tree did not turn out to resemble the model as well as we hoped. We had fun nevertheless, and chuckled along with the boys, who were amused with our antics and our tree. 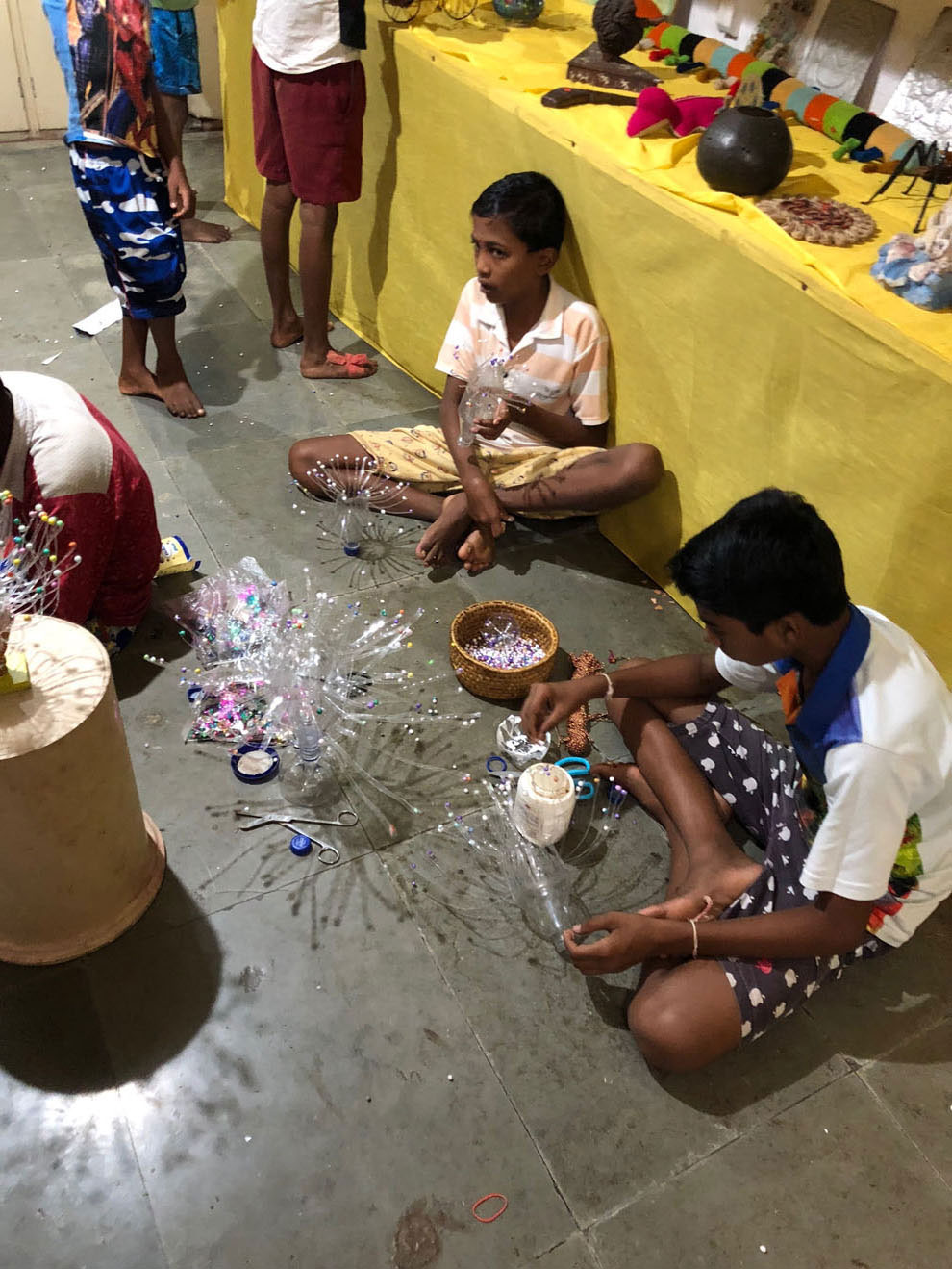 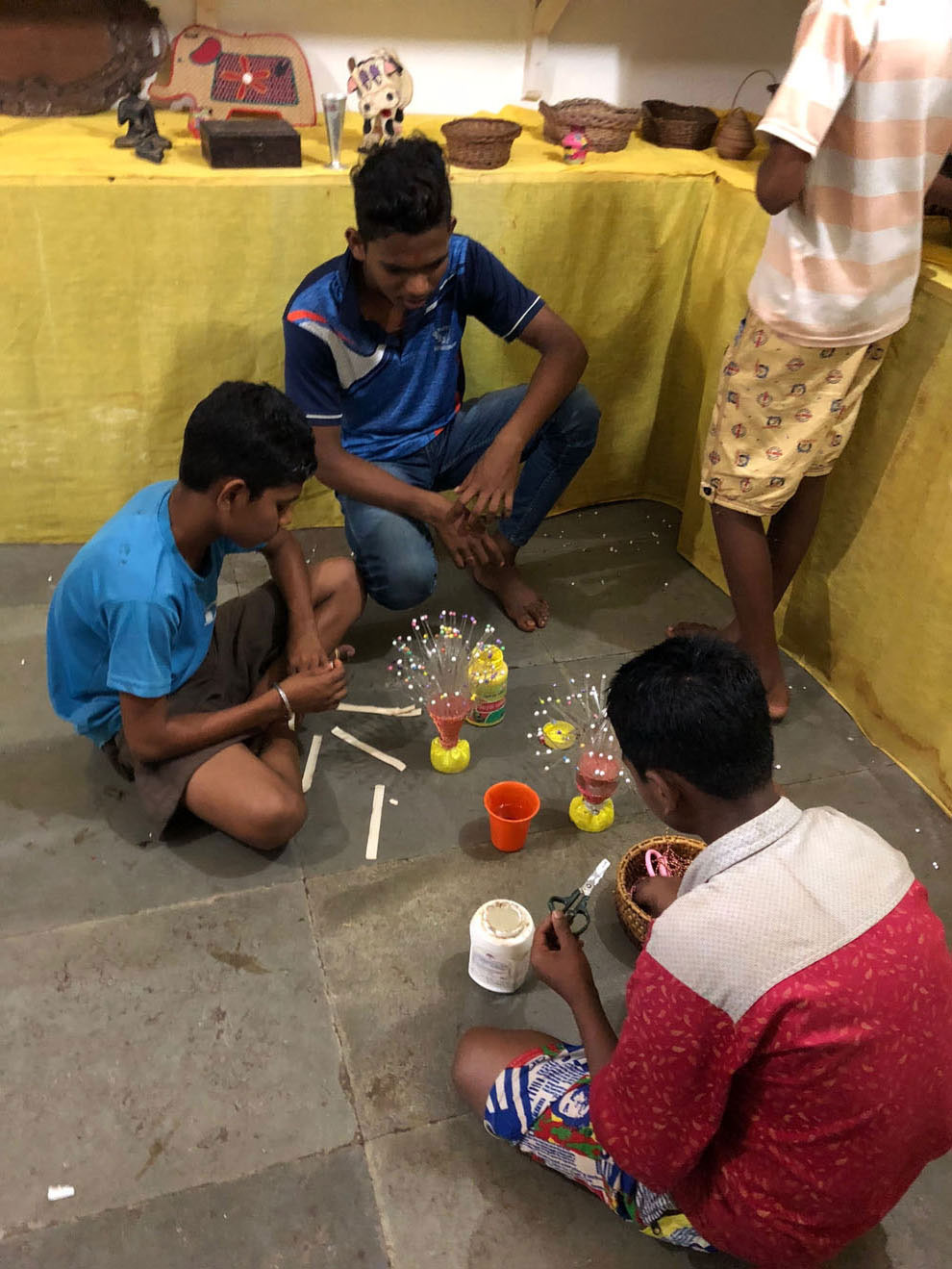 Some boys working on more advanced steps in the tree making process: Adding beads and paint

Soon after our attempt at the tree, we moved into the next room, which was full of drawing supplies, like paper, markers, and colored pencils. More boys and girls had now arrived, each with a clipboard and a pencil in hand, looking around the room at finished drawings hanging on the walls for inspiration. 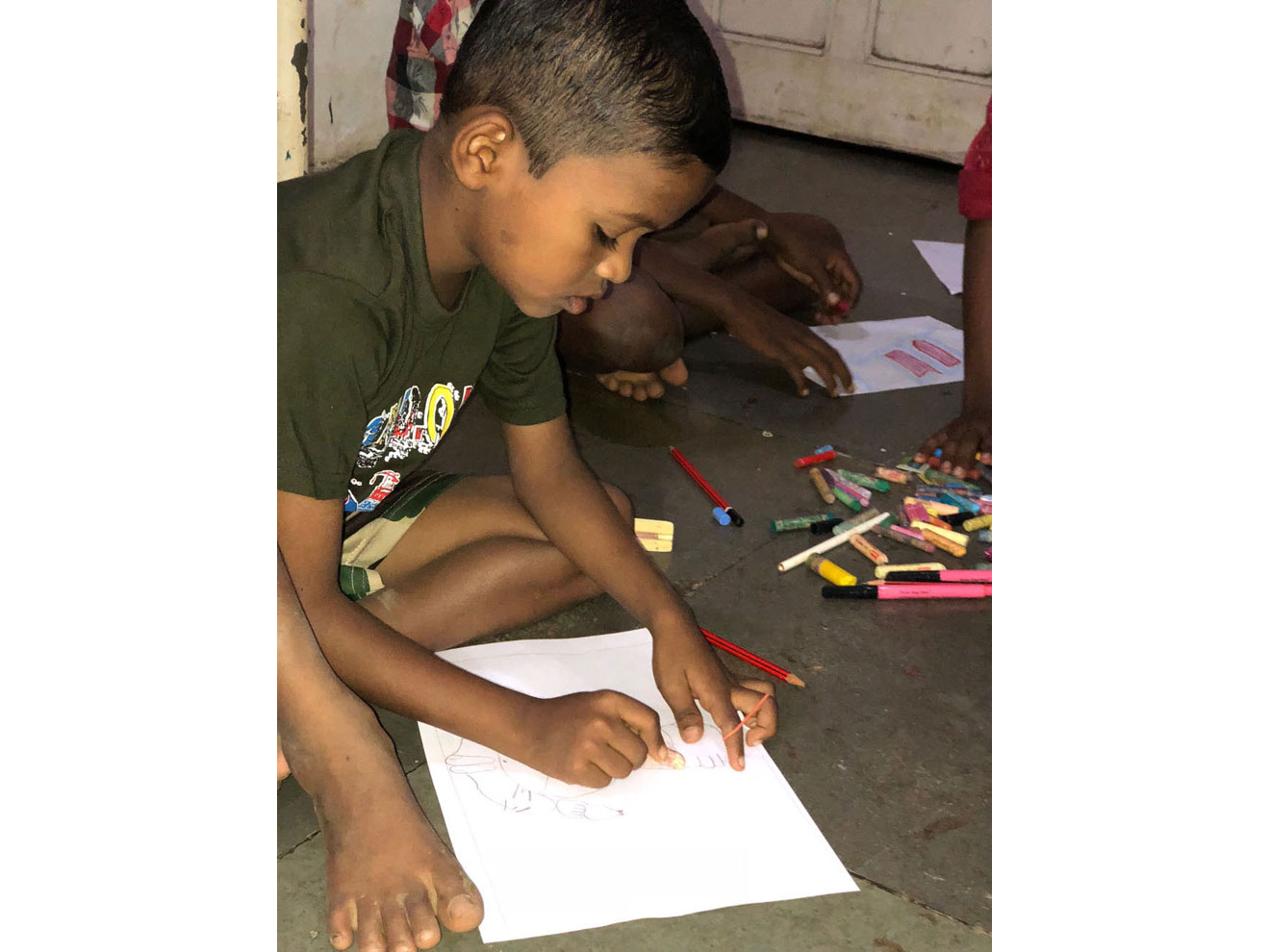 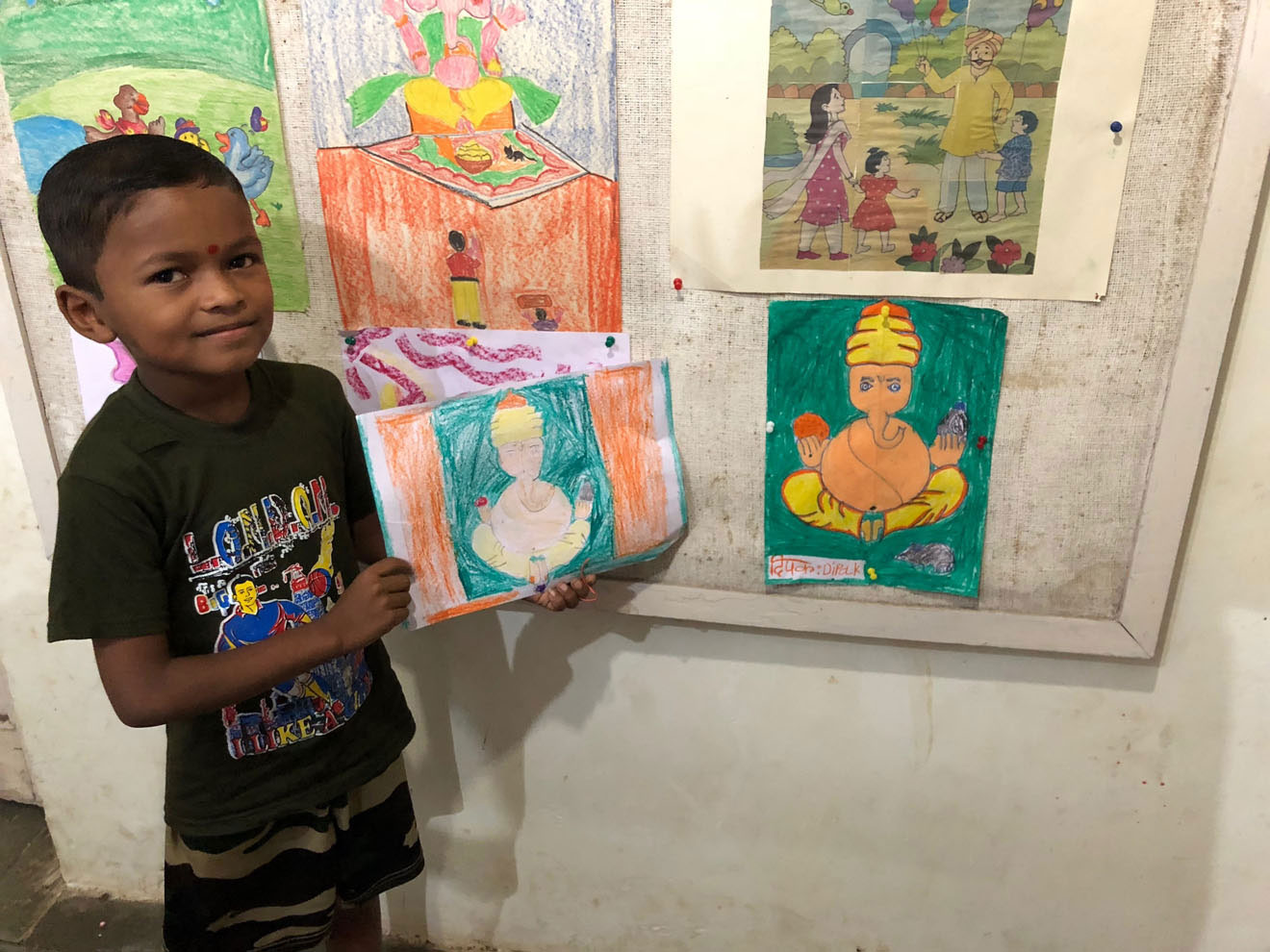 One of the boys drew a picture of Lord Ganesh 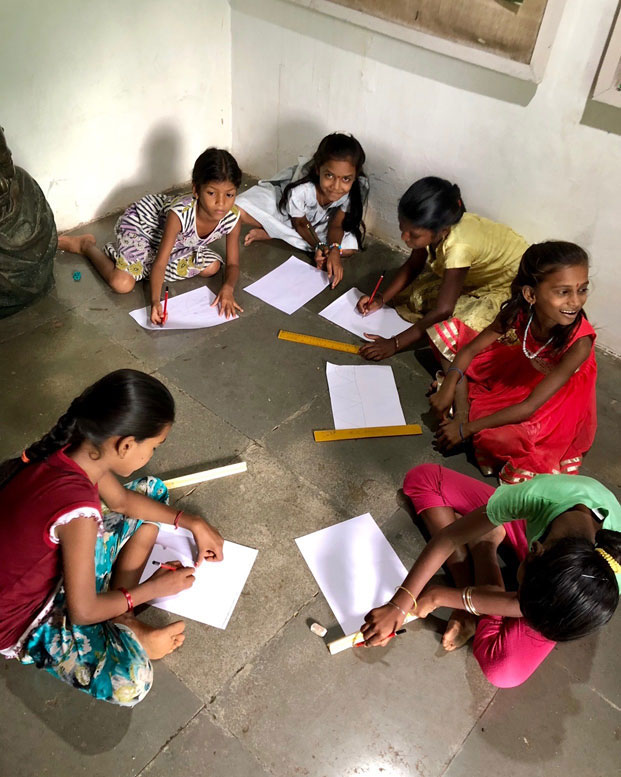 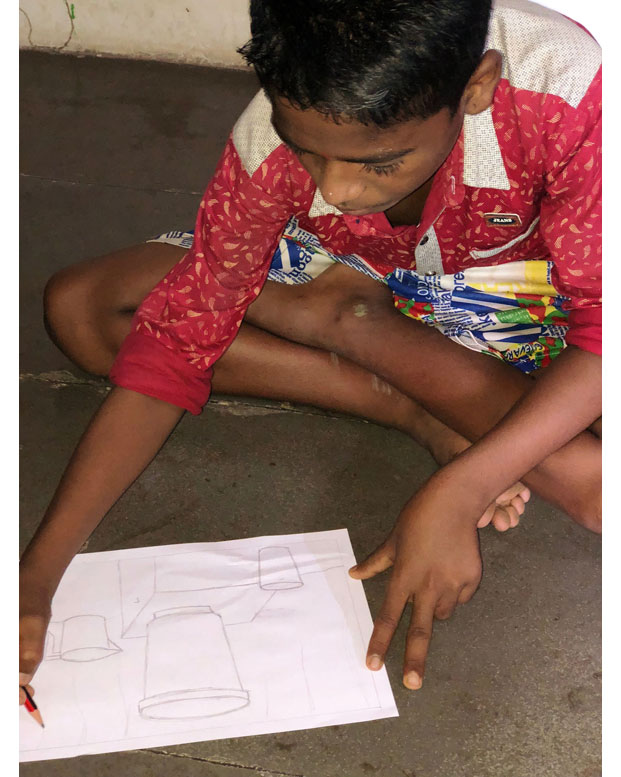 We each picked out a few bright colors and a piece of paper and joined a group of four ninth graders seated on the floor. A few of them were using a black marker and a pencil to draw warli art, a unique style of art indigenous to the state of Maharashtra. 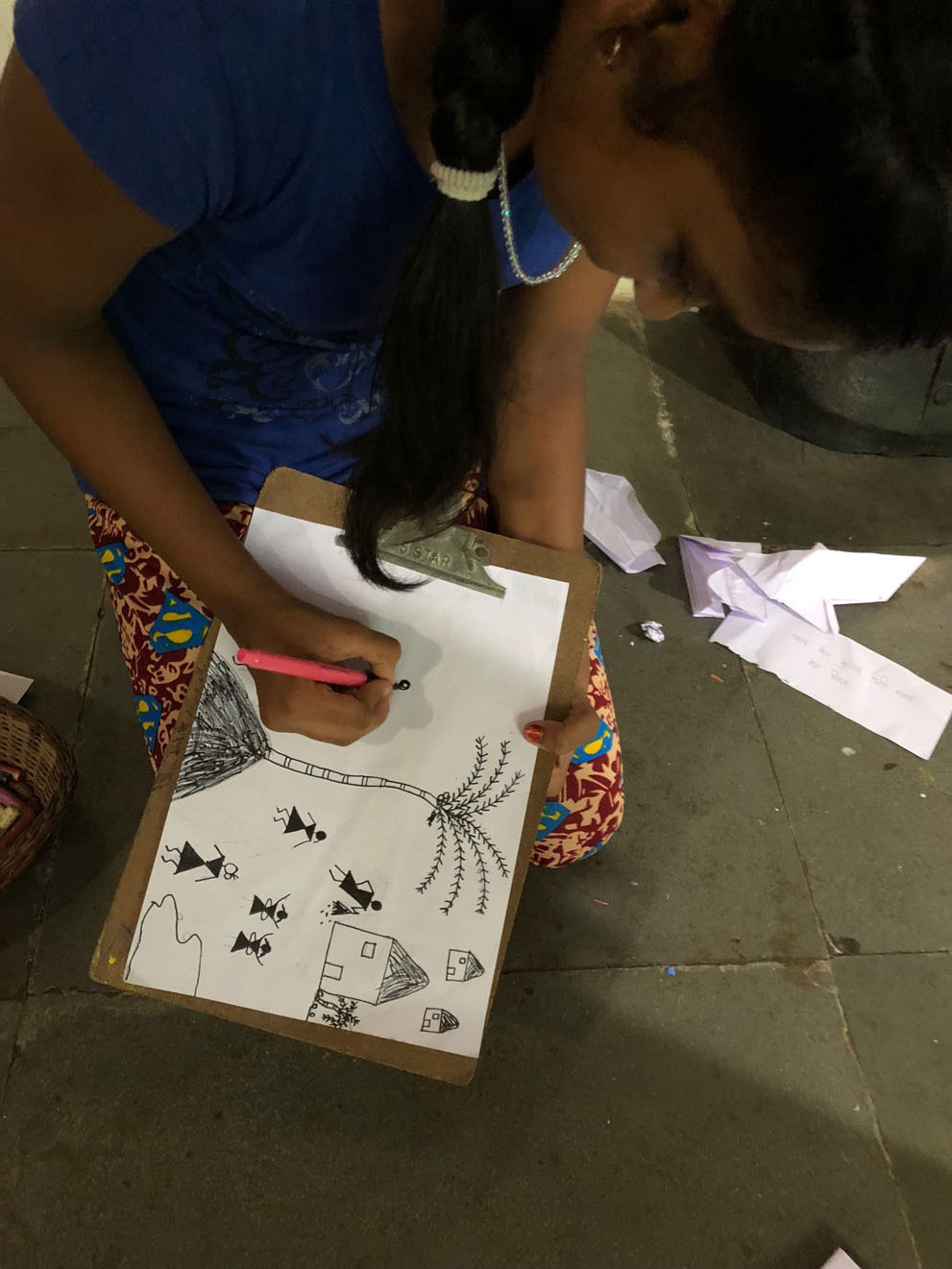 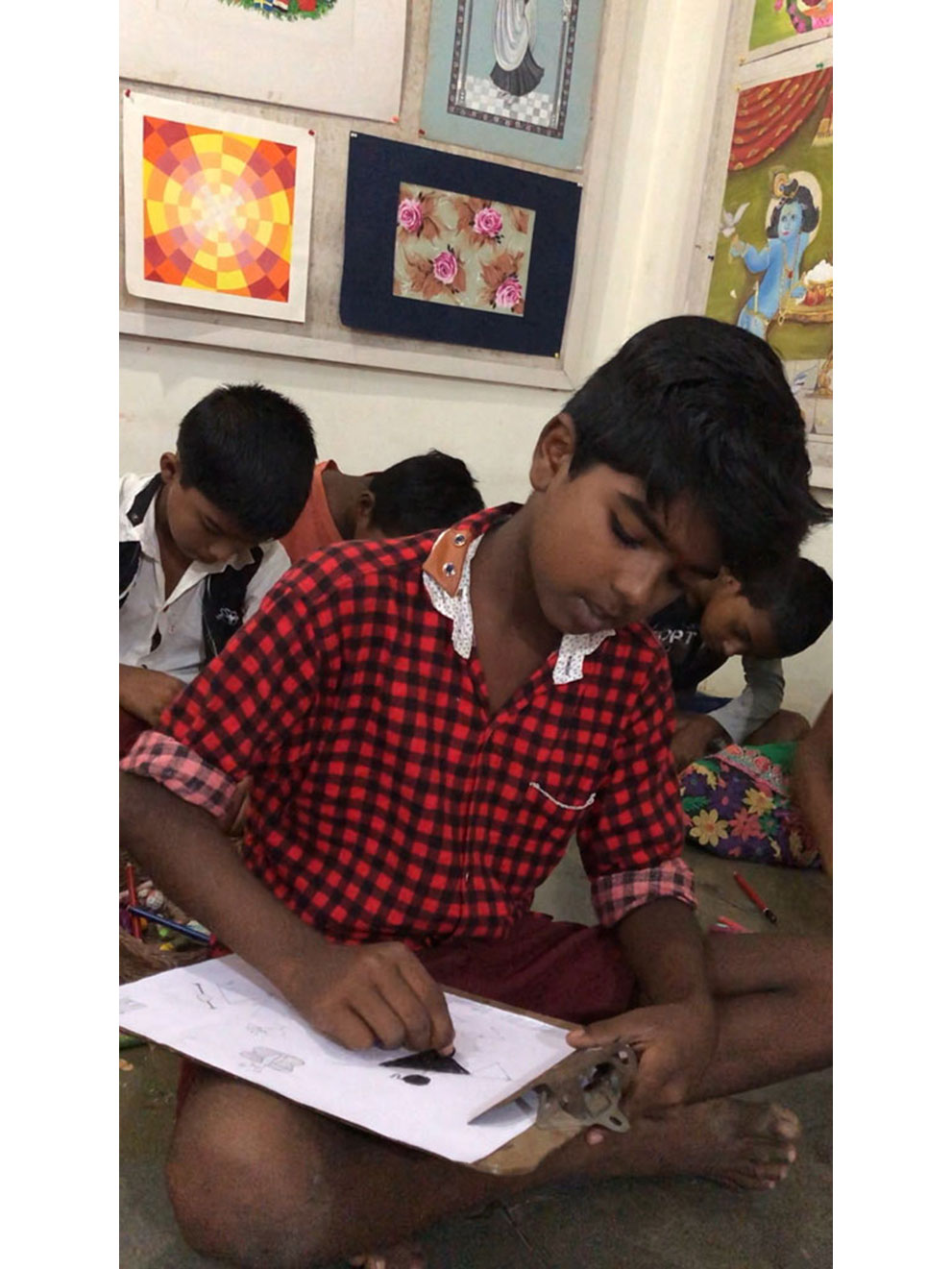 The art class is often centered around warli painting and drawing, a style that is quickly disappearing in Maharashtrian culture. PRASAD teaches the children warli art through these art classes to preserve an important part of the culture in the Tansa Valley. The PRASAD art teacher later explained to us that teaching the children and teens warli painting could also manifest itself into career opportunities for them later in life, as the paintings, although relatively easy to learn, are quite beautiful and not very common. 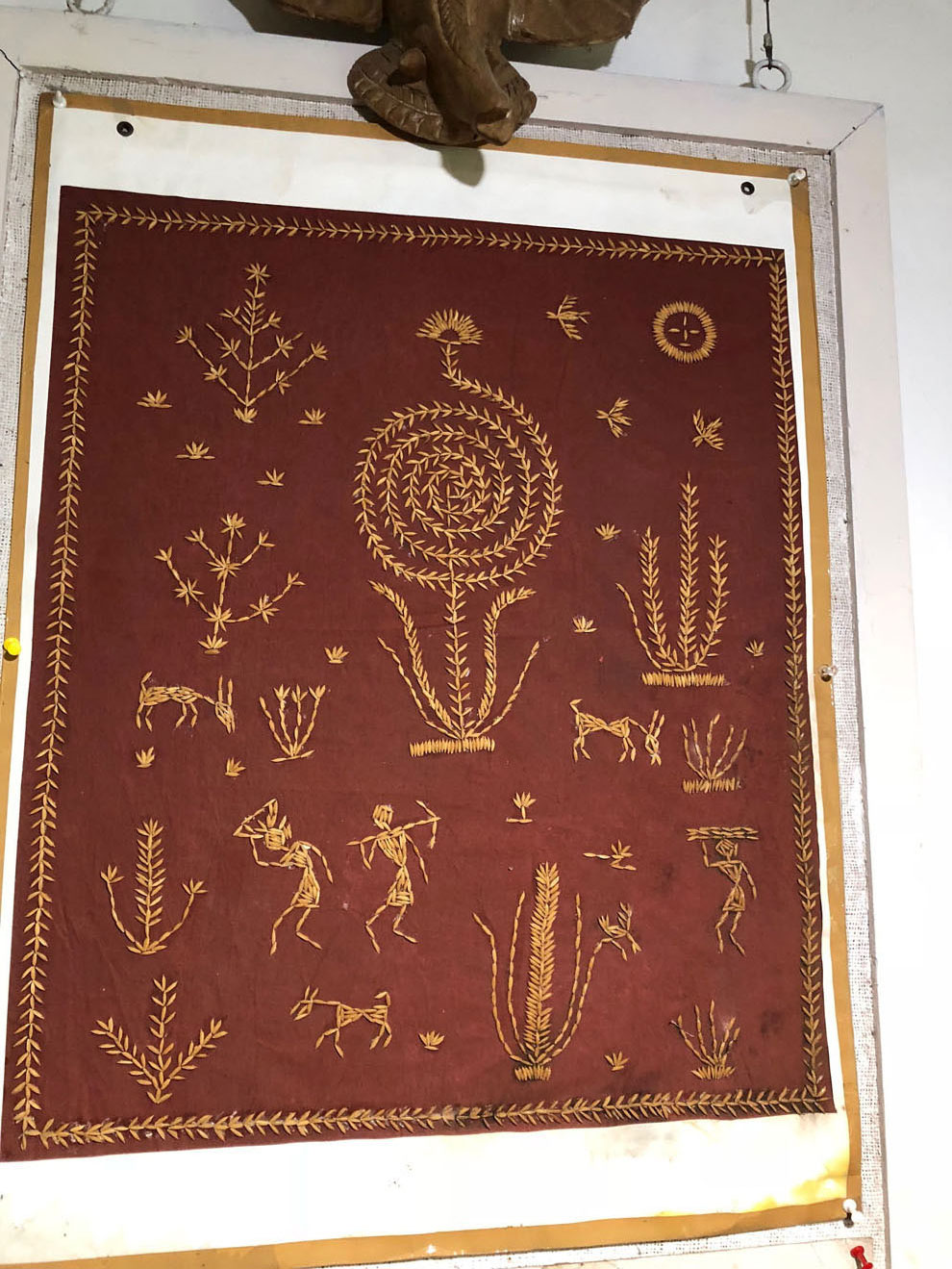 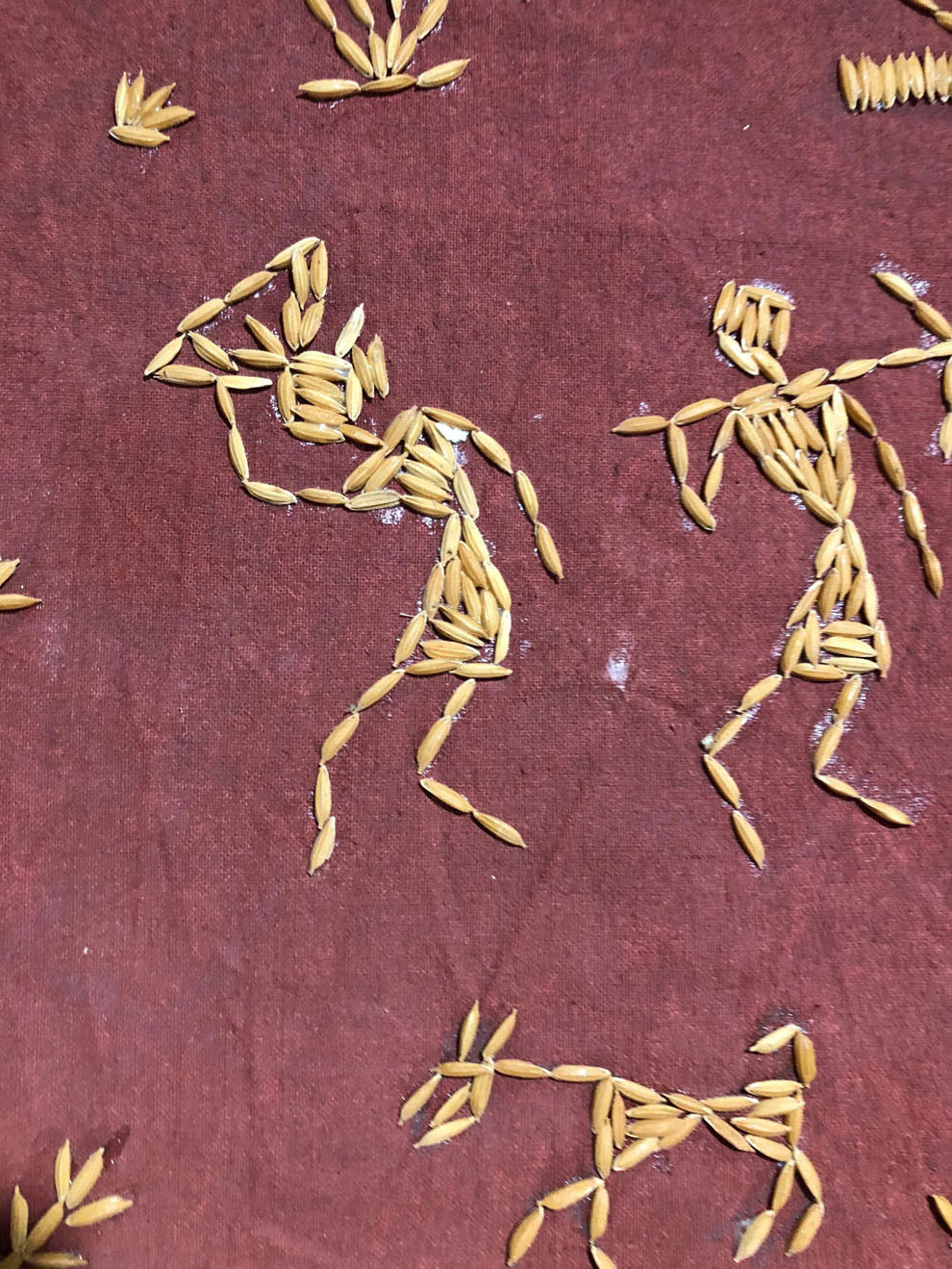 Warli Artwork made entirely out of uncooked rice, displayed on the walls of the building.

Kanak, the girl pictured above, taught us how to draw in the unique style, explaining how to artfully depict people, animals, and actions. 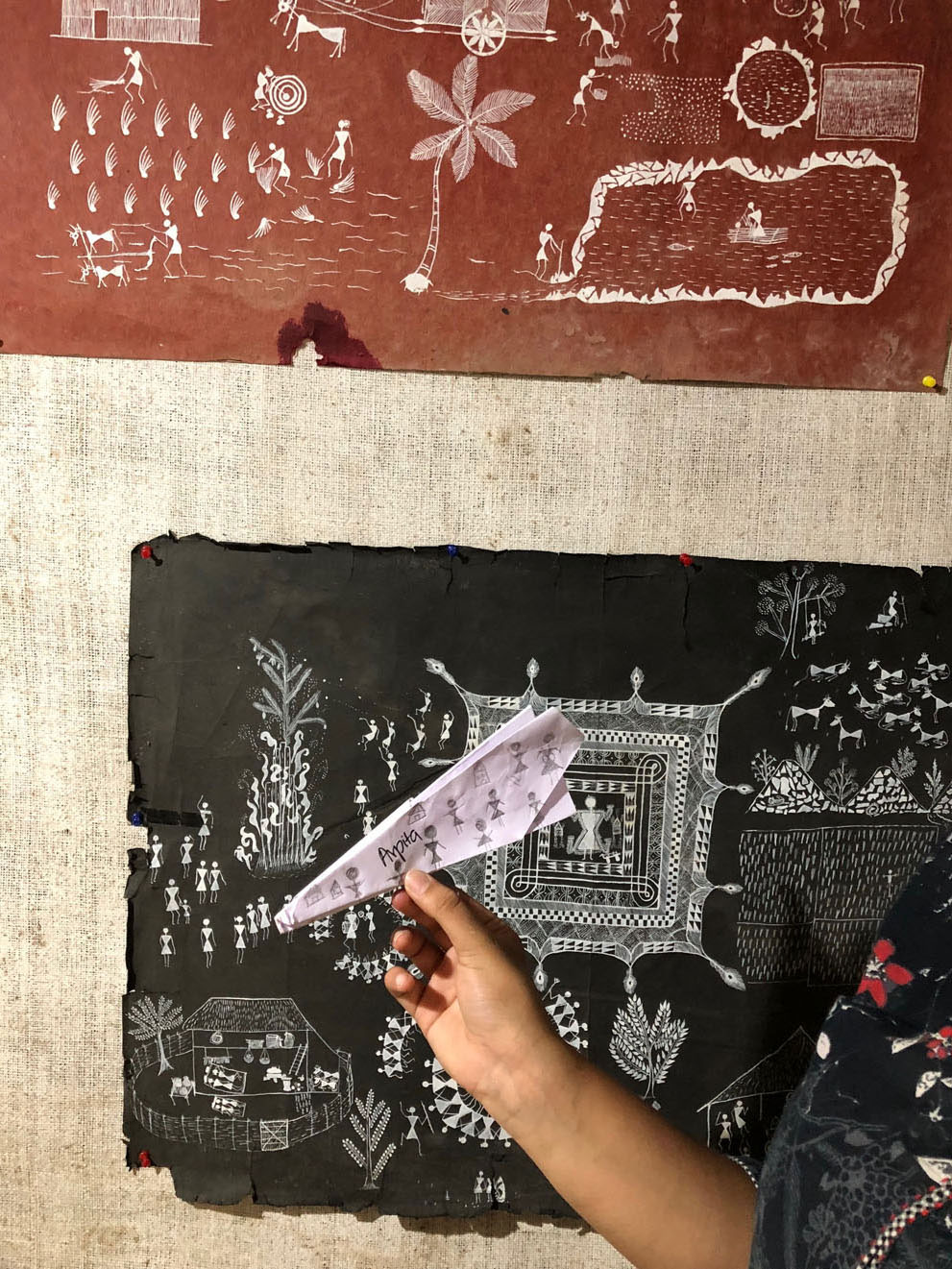 Arpita’s warli painting, later made into a paper airplane

After we drew a few warli figures and finished the drawings we were working on, we felt inspired to practice another form of art. 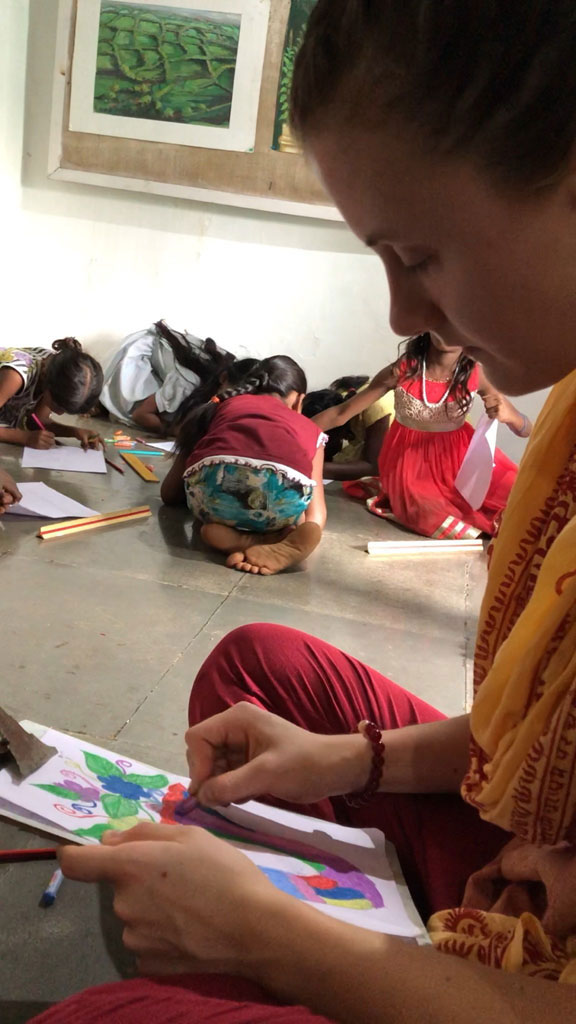 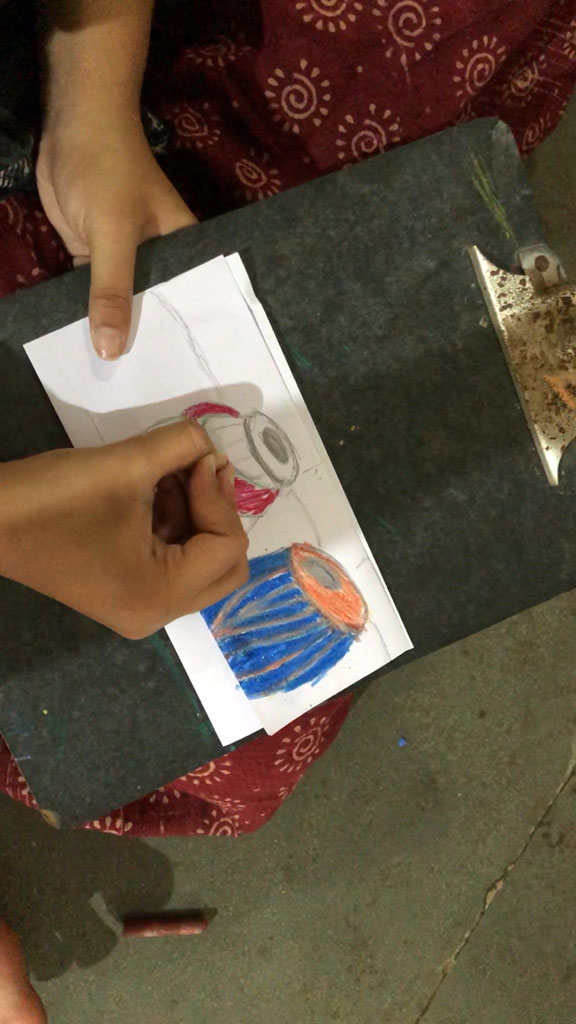 Upon seeing a stack of crisp white paper on a nearby table, we asked the other girls if they knew origami, the art of creating different figures by folding paper. They explained that they had learned to make quite a few different things, although an origami camera was a favorite among the group. A few more kids joined, sharing their favorite origami figures with us. We  excitedly shared what we were making with one another, teaching one another the figures we knew how to make, and trying to remember the complicated animals we had learned back in elementary school. 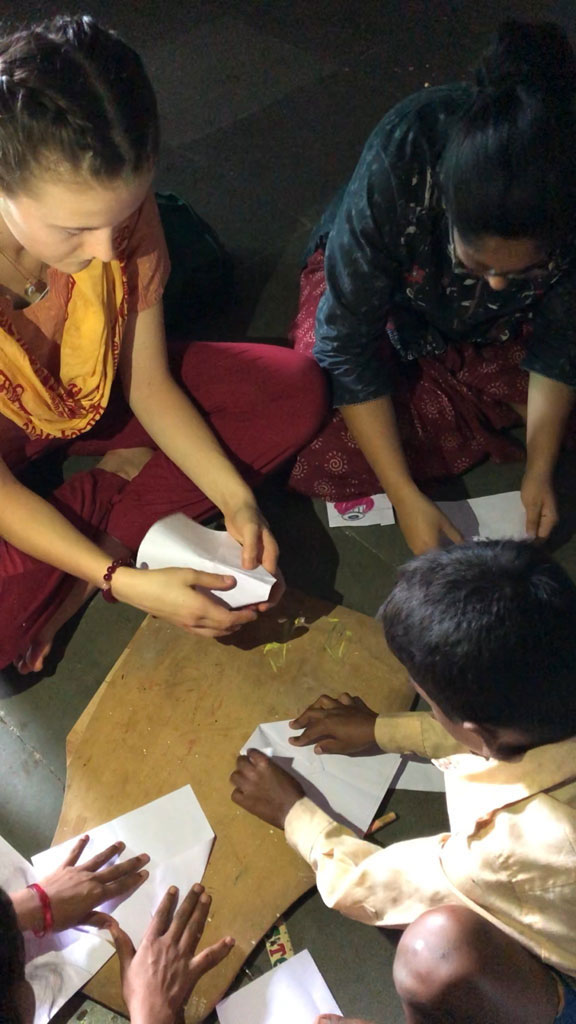 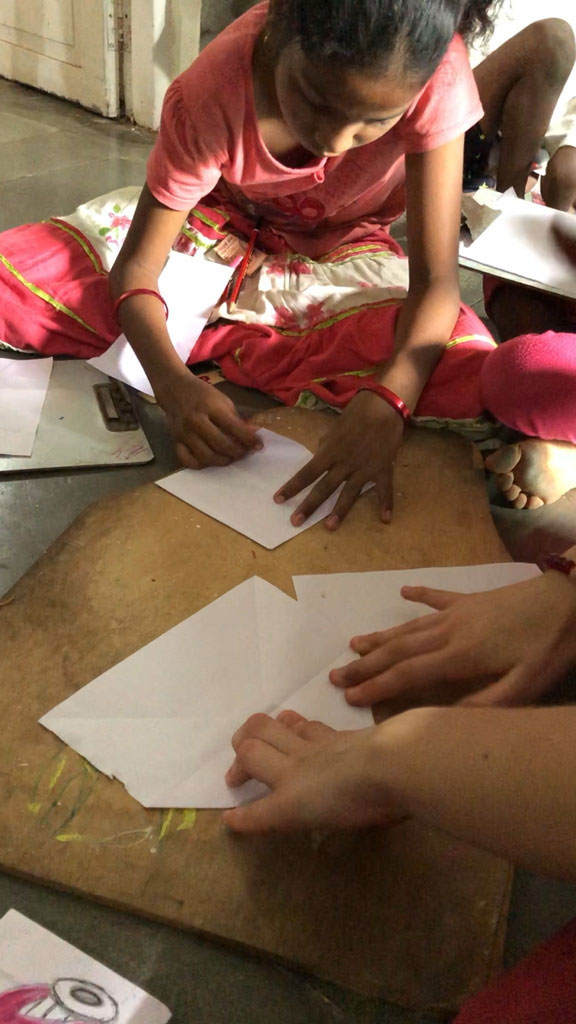 We made a fortune teller/ cootie catcher, something we used to use a lot when we were younger – a fun paper figure meant to tell you your favorite animal based on random colors and numbers. We showed the other girls how to make and use one, using their help to write the names of animals in Marathi, a challenge that caused all of us to burst out laughing as they tried to guess the animal we were acting out. 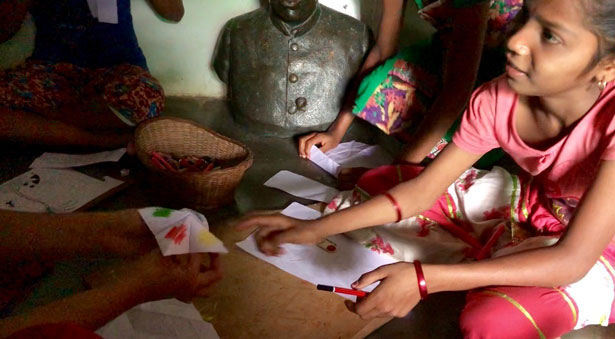 Holding the fortune teller as one girl picks a color 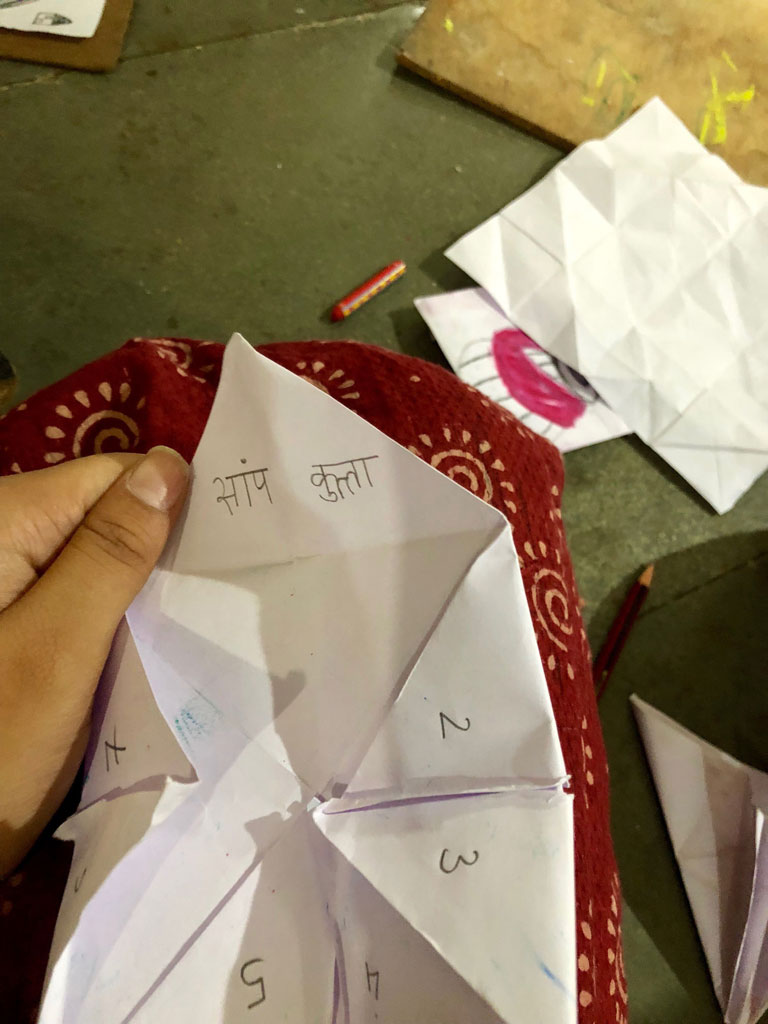 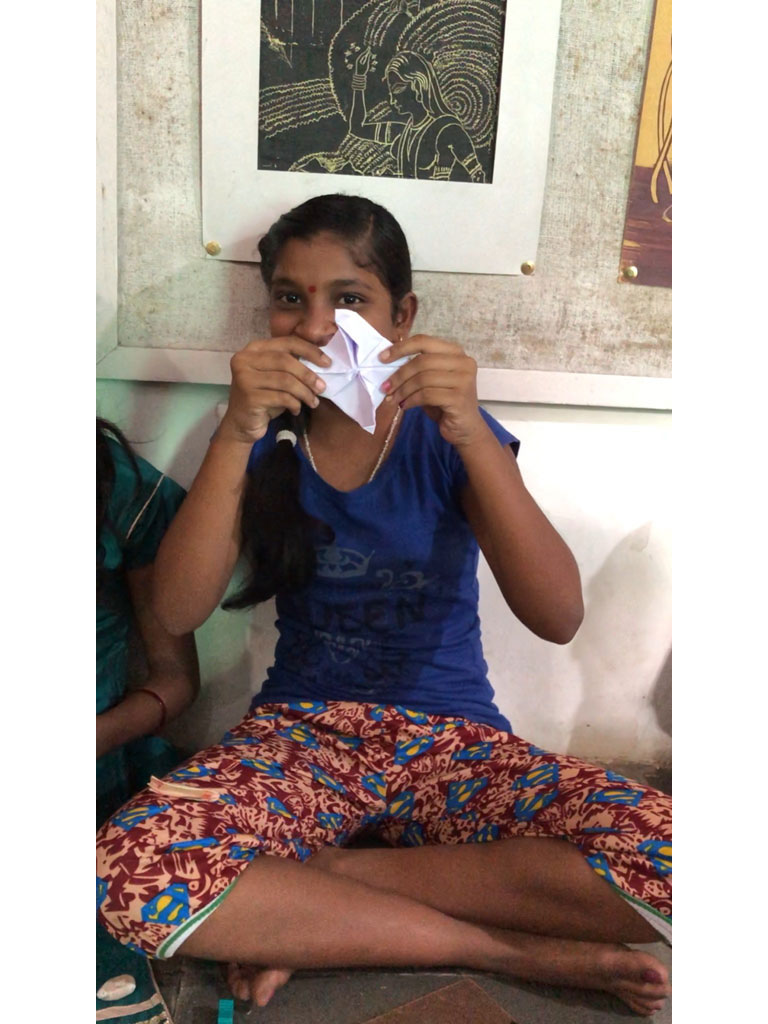 Kanak showed us how to make a Snapper, a popular origami figure among the girls 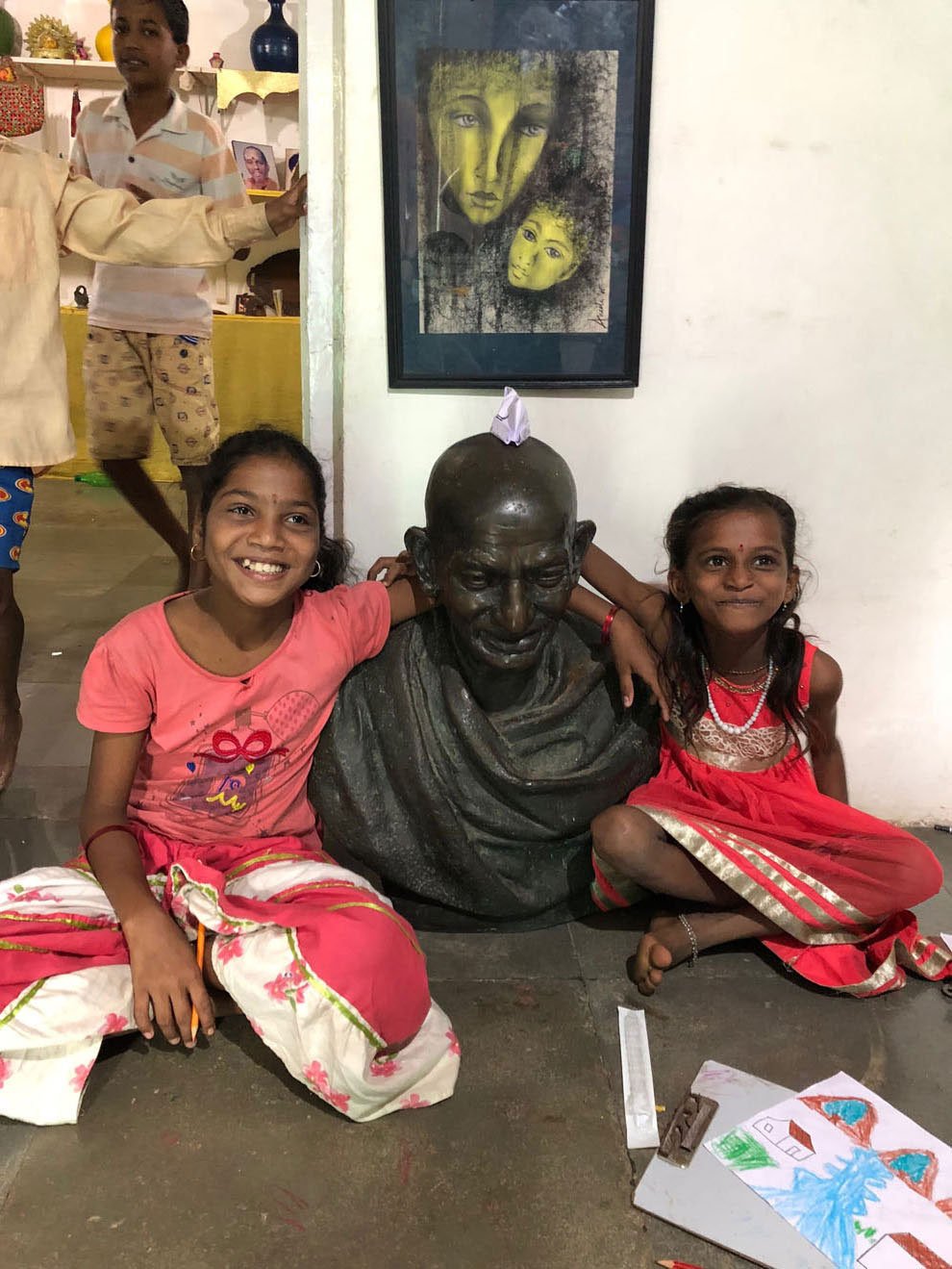 The laughter continued as two of the girls made a traditional paper hat for the Gandhi statue resting near the entrance, trying it out themselves first to make sure it fit correctly before placing it on their subject.

One third grade boy, Tejas, had joined us and wanted to make paper airplanes, a skill we had forgotten since our own third grade days. He was eager to teach us the proper folding method for optimal flight time and speed. 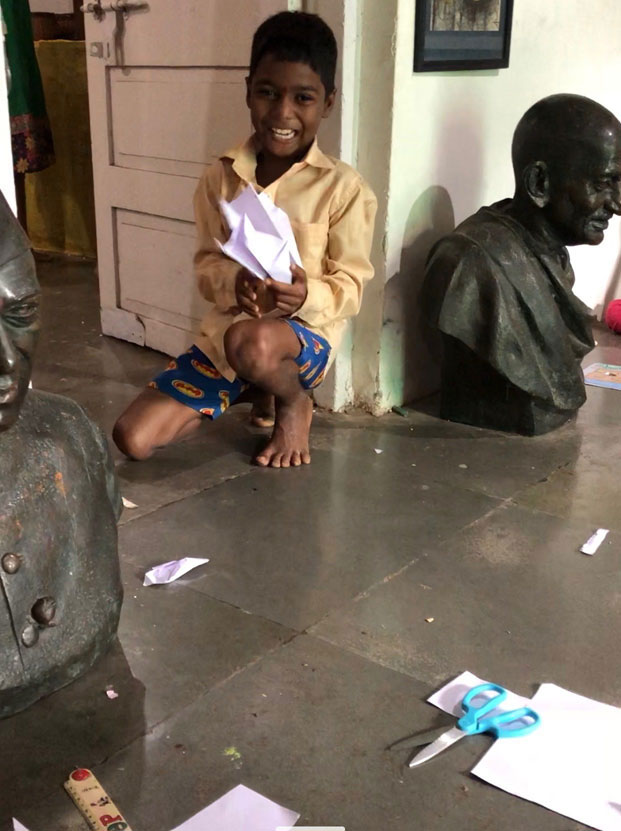 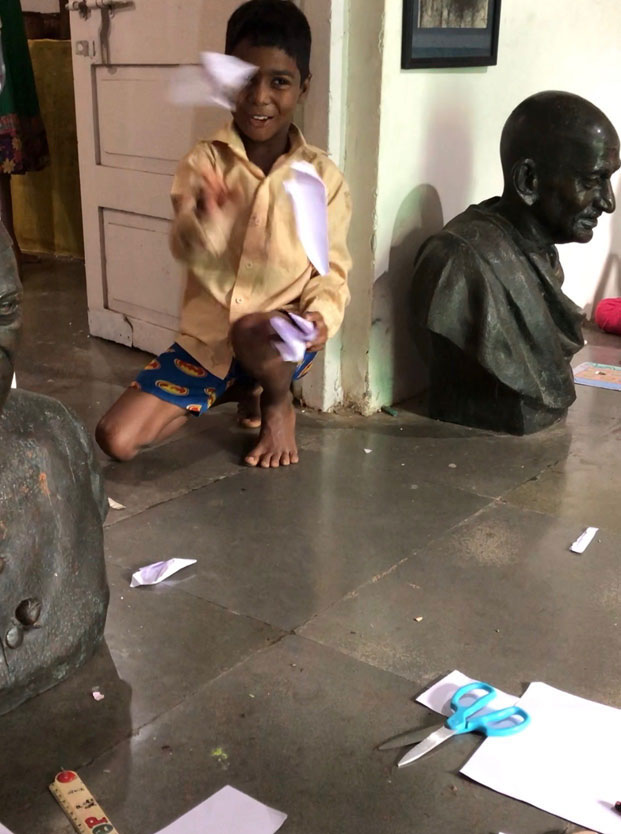 A group of us made quite a few paper airplanes and then choose our best ones for our next activity… racing the airplanes outside! Kanak was the clear winner, her plane spanning the largest distance 3 out of the 4 times we raced them. 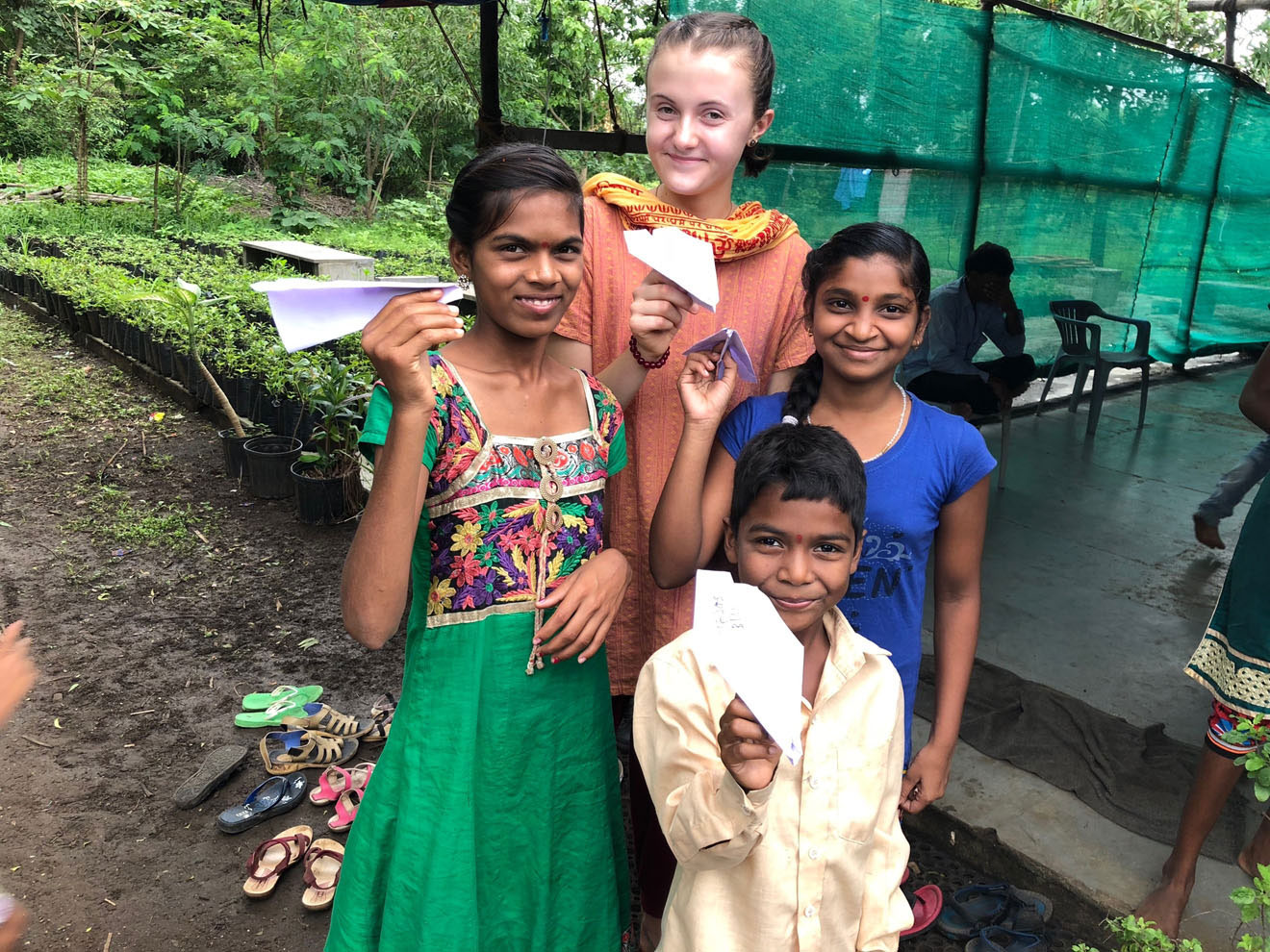 Neha, Bhanu, Kanak and Tejas with their planes

The morning came to a close much too soon, and we soon had to collect our drawings and say goodbye to all the kids, most of whom had already ventured outside to play on the slide and see-saw that decorated the front yard of the building. 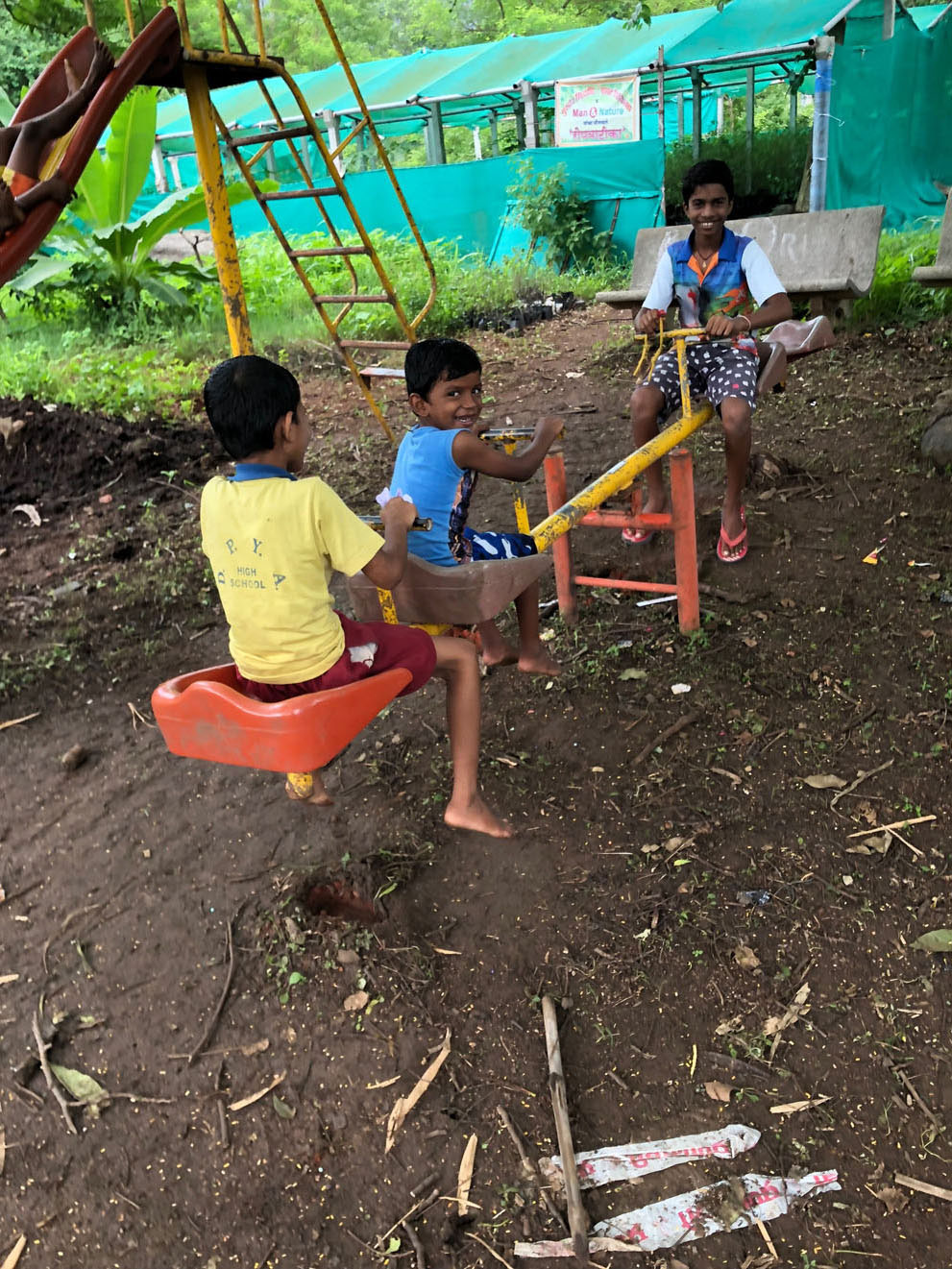 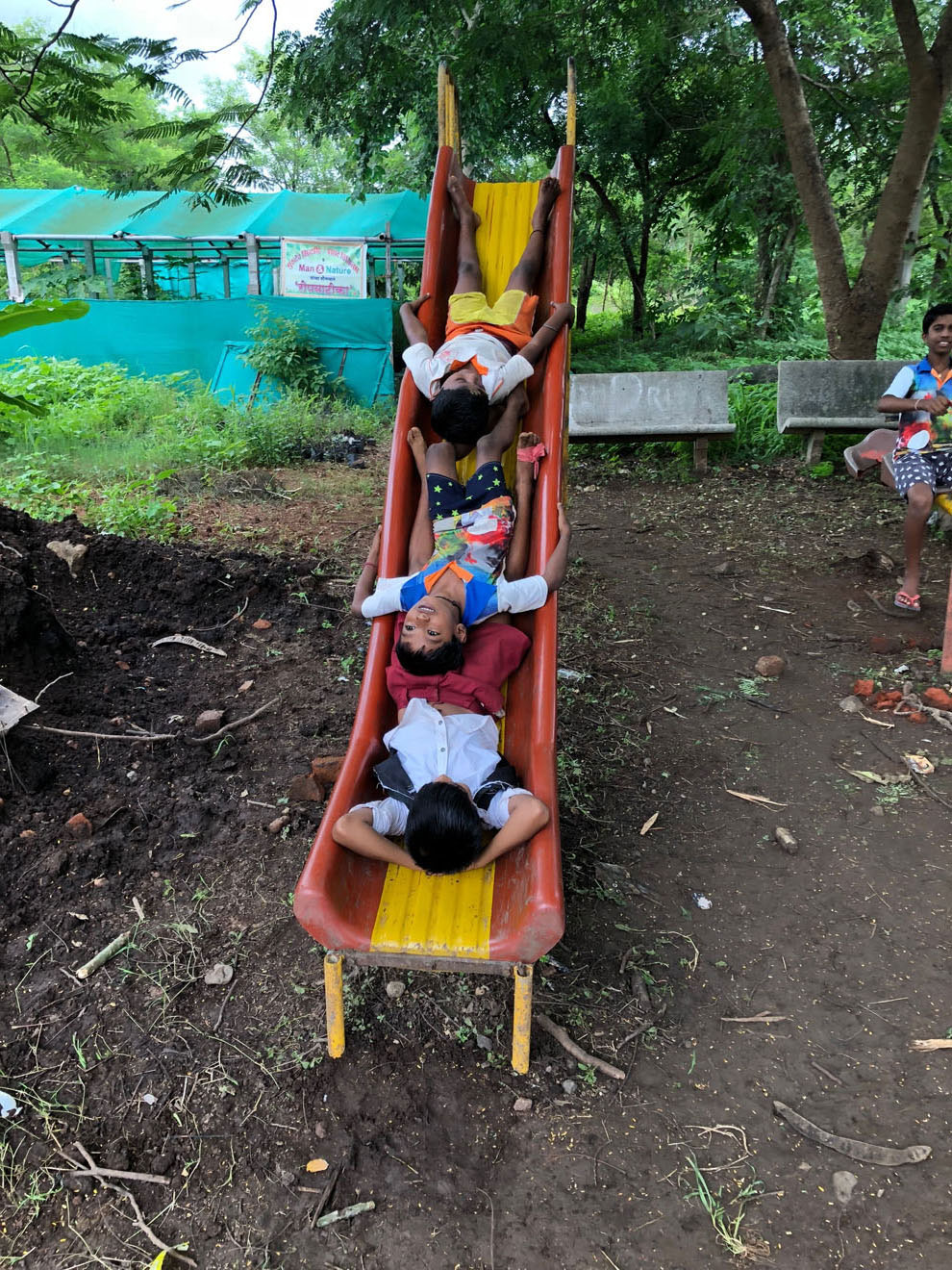 The kids were having a lot of fun playing outside

Arpita:
Working with the children, especially the younger ones, I was reminded of how it felt to draw and paint without any fear of what others would think of my art. One of the kids asked me if I liked drawing. I automatically nodded my head: I’d always loved to draw and paint, my artwork evolving from a few scribbles and paint spills as a toddler to legitimate drawings and abstract painting as a middle schooler. He proceeded to ask me if I draw often or take art classes, which made me pause. I hadn’t drawn or painted much of anything in a while.

I looked around and saw the kids attentively drawing all sorts of different things – animals, flowers, people, warli art – paying no heed to what their friends thought of their art, engrossed fully in doing what they loved. Watching them paint served as a reminder of the joy in simply doing what you love, and for me to make time to do what I liked to do, no matter if I was “good” at it. I feel so lucky to have been able to visit this program and work along with kids and teens to learn new forms of art, and thankful to PRASAD to have given me an opportunity to connect and spend a fun morning with kids and teens. 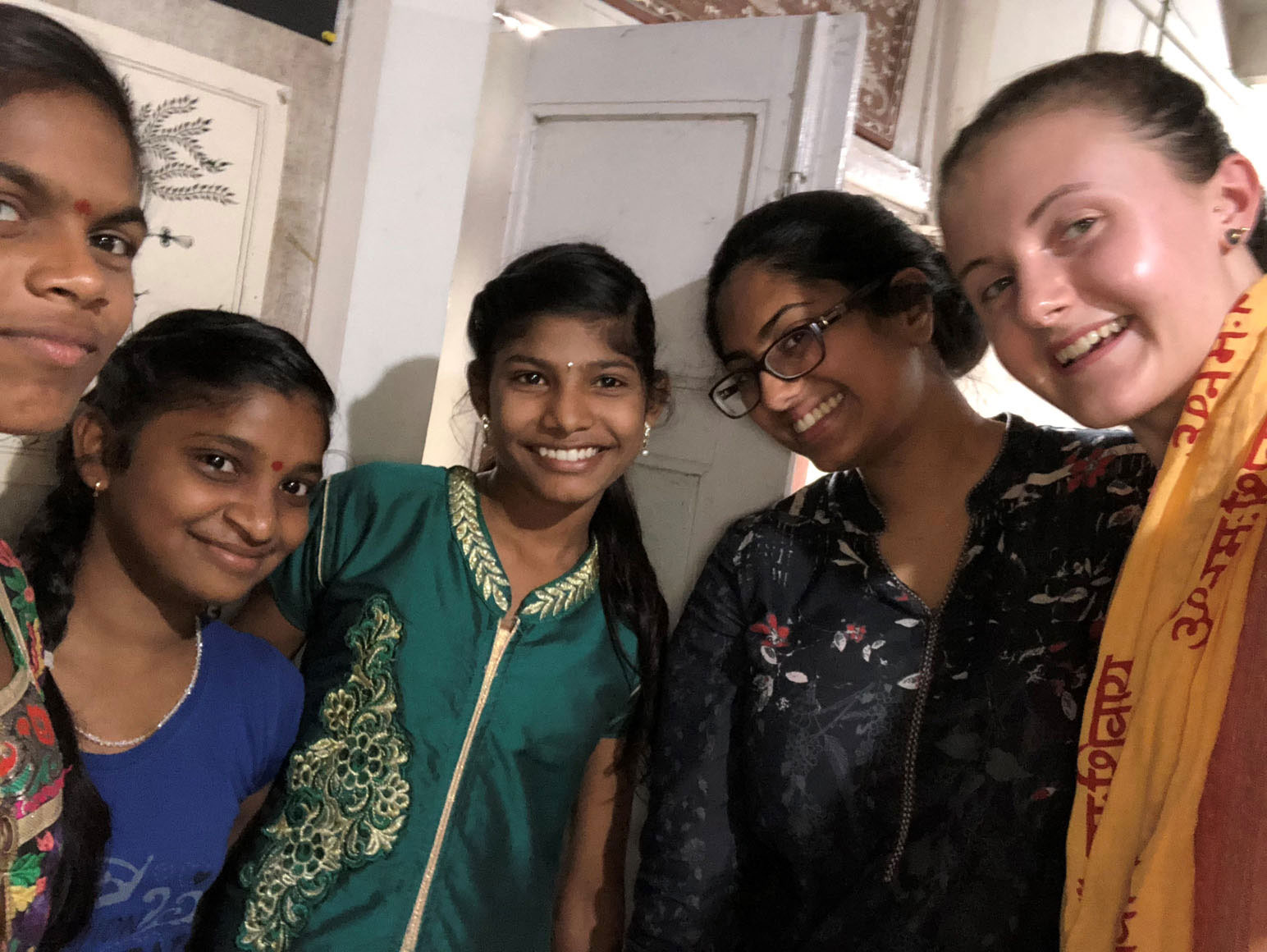 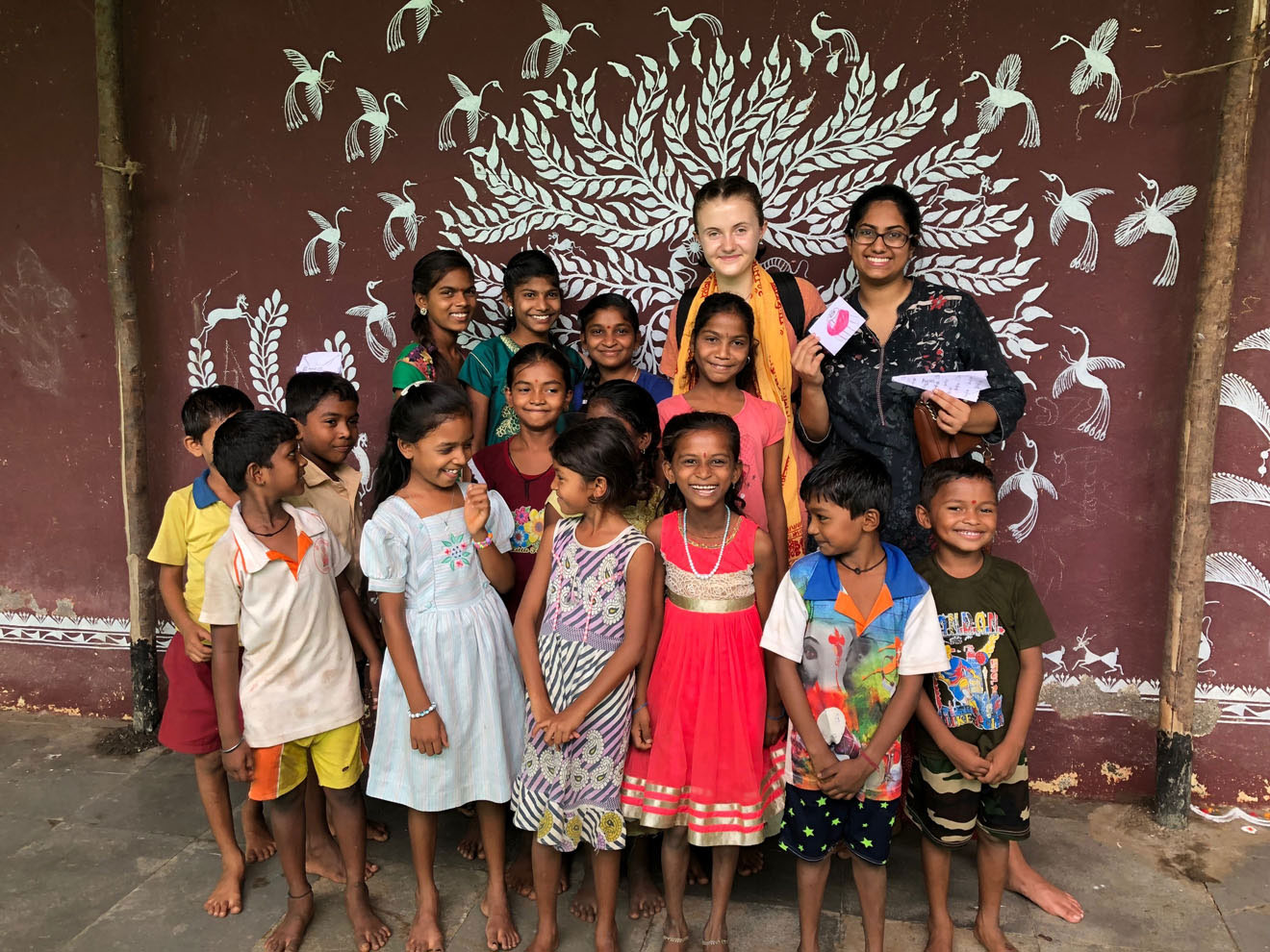 Bhanu:
I first learned origami when I was maybe seven or eight. One weekend a summer my parents and I would host a group of several girls from Japan. They would be around my age and would often speak minimal English. My absence in the knowledge of Japanese further kept us from communicating vocally, but we soon found a common ground where we could interact with each other…

At the dining room table we would sit with neat stacks of small, squared shaped paper. Excitement would manifest from deciding which of the colorful squares to use for constructing our next creation. Upon my first attempt at origami, I remember wishing the folding itself was just as easy as that first decision. The girls were very attentive to my novice skills, making sure I had completed each fold correctly before continuing on to the next step. Their ability to recall from memory the directions to make such meticulous forms, (a lion or a crane, and even a piano!) never ceased to amaze me. They wouldn’t let me be too discouraged when my end result didn’t seem to look as attractive in comparison to theirs. Their patience and instruction helped me to learn such a fun and unique way of expressing oneself, and I was able to experience firsthand at a young age a different way of communicating with others. I have always cherished the memories and skills I gained from these girls, and I am so happy that I was able to put them into practice and be able to connect with the kids at the arts and crafts program. 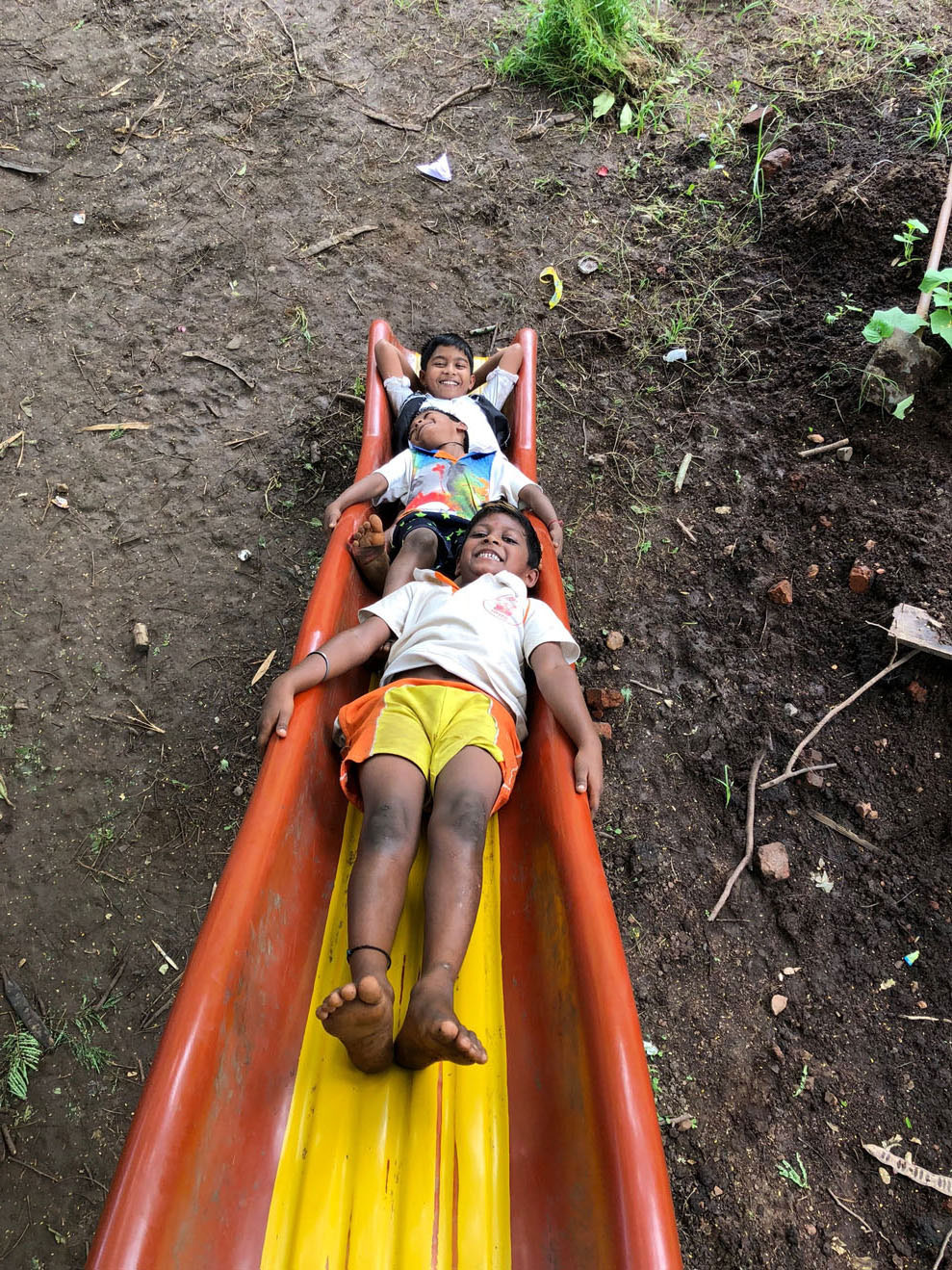 Thank you PRASAD for helping us to further develop this beautiful form of communication!

Until next time,
Bhanu and Arpita